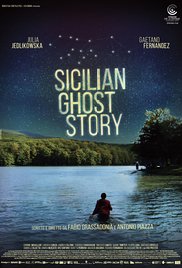 Against a heavy cloak of secrecy, a 12-year-old girl smitten with her handsome classmate ventures deeper and deeper into the enchanted Sicilian forests to find him, unaware of just how thick is the mystery behind his strange disappearance.

Set in a small village in Sicily and loosely based on true events, ‘Sicilian Ghost Story’ is a haunting, atmospheric drama about a 13 year old boy who vanishes into thin air and the girl determined to find him. It is inspired by the true story of Giuseppe Di Matteo, a young boy who was abducted in 1996 by the Sicilian mafia in order to silence his father who had turned state’s witness. Despite the basis in fact, ‘Sicilian Ghost Story’ is a film less concerned with the abduction and more with the impact it has on Luna (Julia Jedlikowska), specifically in the way her innocence and youth precludes her from understanding why Giuseppe’s (Gaetano Fernandez) disappearance is barely acknowledged by the rest of the community.

The ‘ghost’ of the title has multiple meanings in the film and is left open to audience interpretation, but it mostly refers to Giuseppe, who is forgotten about by all but Luna shortly after he disappears. The childlike love and affection between Luna and Giuseppe is wonderfully played by the young actors and there’s a poetic beauty to their encounters, with the brightness and lighting enhanced to give off the feeling that these meetings are occurring in an enhanced state of reality. The film is directed by a duo (Fabio Grassadonia and Antonio Piazza) and they take a stylistic approach to telling their story, utilising elements of magical realism to blend reality and imagination. The basis for the story would make for an intense film by itself but it’s heightened in ‘Sicilian Ghost Story’ by the outstanding cinematography and ethereal approach that serves to enhance the power of the narrative.

‘Sicilian Ghost Story’ is a superb drama that uses its real life basis as a jumping off point to create a magical story of young love caught between heightened fantasy and dark reality and I thought it was phenomenal.