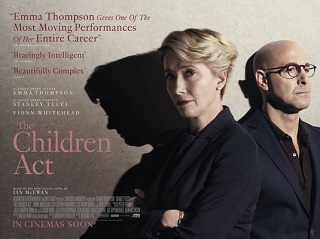 As her marriage crumbles, a judge must decide a case involving a teenage boy who is refusing a blood transfusion on religious principle.

Based on a novel by Ian McEwan, ‘The Children Act’ is a British drama that tells the story of a high court judge (Emma Thompson) who finds herself heavily involved in a blood transfusion case concerning a 17-year-old Jehovah’s Witness. The material is sensitively handled by director Richard Eyre and Ian McEwan (who wrote the script from his own novel), and I felt it explored issues of individual choice vs state intervention in medical cases with tact. There are no villains here; just concerned parents and medical professionals, and a boy (Fionn Whitehead of ‘Dunkirk’) who is mature enough to know the consequences but naïve enough not to think it all through.

I thought the film started superbly with the excellent courtroom sequences but it started to run out of steam towards the end once the case was settled and the narrative moved away from the central premise. The marital strife subplot didn’t really connect with the central narrative and felt like a waste of Stanley Tucci, although his proposed approach to having an affair did give me a laugh in how matter of fact he raised the issue. Even as my interest in the story started to wane in the latter part of the film, Emma Thompson’s subtle performance held my attention and she is really excellent in the role

I saw a film around 4 weeks ago called ‘Apostasy’ which explores the attitudes to blood transfusion from Jehovah’s Witnesses in a far more pointed fashion, and whilst the goals of ‘The Children Act’ are slightly different, it lacked the intensity and power of that film. So my recommendation would be to check out ‘Apostasy’ if you want to see a film that really delves into this particular issue, but if you do see ‘The Children Act’ you’ll at least enjoy Emma Thompson’s fine performance.