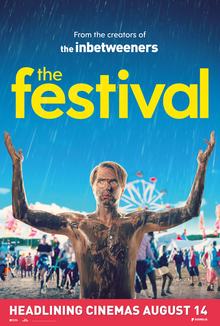 After Nick’s girlfriend dumps him, his best mate Shane has the perfect antidote to his break-up blues: three days at an epic music festival.

‘The Festival’ is a new comedy from Iain Morris, one of the creators of ‘The Inbetweeners’, and it feels like a natural progression from that series (and the sequel films) as it focuses on another youthful rite of passage. The rite of passage in this case is a music festival and the film has much to relate too for anyone who has ever been to one, whether you’re the kind of person that hates them or the kind of person who fully embraces the experience. The film stars Joe Thomas (Simon from ‘The Inbetweeners’) as Nick, a recent graduate who split up with his girlfriend (Hannah Tointon) in embarrassing fashion at his graduation, alongside his best mate Shane (Hammed Animashaun) and a host of supporting characters.

In terms of actual plot, the film loosely follows Nick trying to get over his breakup which is particularly difficult given he’s at an event with his ex and her friends, whilst also trying (and mostly failing) to embrace the festival experience. Like many comedy films it’s a bit hit and miss with some sequences working better than others, but it’s clearly been made by people who understand the good and the bad of a festival and it generates most of its laughs from exploring both sides. Joe Thomas was always a little more willing to debase himself for comedy than his castmates in ‘The Inbetweeners’ and his gift for awkward, physical comedy is utilised to good effect again with several moments that will make you cringe and laugh at the same time (especially a great dance sequence that recalls the highlight of the first ‘Inbetweeners’ movie). Supporting performances come from the likes of Jemaine Clement, Nick Frost and Noel Fielding and I thought Amimashaun was good as Nick’s best mate.

I thought ‘The Festival’ was a funny comedy with some humorous insights about festivals and if you’ve enjoyed the previous works of Iain Morris, I suspect you’ll find much to enjoy here.