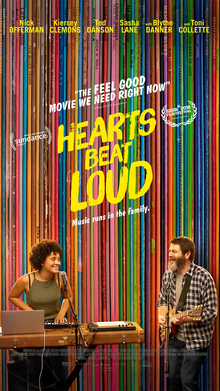 A father and daughter form an unlikely songwriting duo in the summer before she leaves for college.

After a hard day in the office, there isn’t much better than a feel good comedy-drama to take your mind off things, and ‘Hearts Beat Loud’ was just the ticket in that regard. Starring Nick Offerman and Kiersey Clemons as a father and daughter, the film is about the bond they form through music after the loss of their wife and mother. Frank (Offerman) is a struggling record store owner and Sam (Clemons) is a talented student getting ready to head off to medical school after the summer, and much of the time they spend together revolves around ‘jam’ sessions where they play music together. When a song they recorded goes viral, Frank tries to persuade his daughter to start a band with him.

The film has an infectious quality to it, through both the catchy pop tunes the duo play and the sweet dynamic Offerman and Clemons have with one another. Nick Offerman is one of my favourite comedic actors, largely through his superb performances as Ron Swanson on TV’s ‘Parks and Recreation’ and his giddy, childlike excitement at playing music with his daughter is great fun to watch. Clemons is equally good, whether it’s acting as the voice of reason to her dad or her scenes with Rose (Sasha Lane), who plays her girlfriend. Frank’s desire to start a band comes from the nostalgia he feels for the band he had with his wife, and the film mines some emotional moments from that background whilst also recognising that starting a band with your father is deeply uncool. Alongside the central duo and Lane, the always enjoyable Ted Danson and Toni Collette play supporting roles in Frank’s story.

‘Hearts Beat Loud’ is a heartwarming independent U.S. drama, elevated by the chemistry between Nick Offerman and Kiersey Clemons and I really enjoyed it.