To mark the release of Nadine Labaki’s stunning ‘Capernaum’, the story of a young boy on the streets of Beirut in Lebanon, I’ve pulled together a list of some other great films about childhood. In no particular order, here are 10 I’d recommend…

For details of where to find these films online, https://www.justwatch.com/uk/ is a really valuable resource!

Set in 1970s Glasgow, ‘Ratcatcher’ tells the story of a young boy living in poverty as his family waits to be rehoused. Directed by Lynne Ramsay in her debut, ‘Ratcatcher’ beautifully captures the curiosity of youth and feels rooted in the time and place in which it is set, even as it can be a tough watch at times.

“The sun is for everyone, the beach is for those who deserve it.”

From Glasgow to Rio, ‘City of God’ is a breathtaking drama set in a crime ridden favela where every day comes with fresh dangers. Seen through the eyes of ‘Rocket’, ‘City of God’ explores this environment and the challenges that come with trying to escape the corruption and murder. 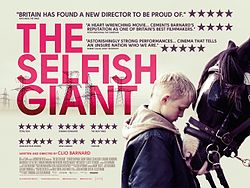 Clio Barnard’s second film is very much influenced by the works of Ken Loach and British social realism in general, and ‘The Selfish Giant’ is a real gut punch of a movie. Following two teenage boys in a poor area of Bradford who steal scrap metal to earn money, ‘The Selfish Giant’ combines wonderful child performances with socio-political commentary and it’s a film that deserves to be seen by more people.

“I never had any friends later on like the ones I had when I was twelve.”

Based on a Stephen King novella and adapted for the screen by Rob Reiner, ‘Stand By Me’ is the quintessional children’s adventure film. Following four friends who set out on a hike to find a dead body, the film is about the adventures we have as kids, how kids bond, and how these fleeting moments shape us forever. It’s a timeless classic and always good for a rewatch.

In more recent times, there’s been some solid entries in this subgenre but one perhaps talked about less is ‘A Monster Calls’, a stunning exploration of childhood grief. Perhaps the talking tree (voiced by Liam Neeson) and fantastical premise put people off, but this is a film that gets under your skin and the performance from young Lewis MacDougall will reduce you to tears.

“You’ll meet her, she’s very pretty, even though sometimes she’s sad for many days at a time. You’ll see, when she smiles, you’ll love her.”

Guillermo Del Toro’s best film is a magical fantasy that contrasts the real world setting of Spain during the Civil War and a mythical world set around an abandoned labyrinth and the creatures that inhabit it. Our viewpoint into both these worlds is Ofelia, a young girl who witnesses the horrors of her environment first hand and it’s a truly transporting piece of work.

“Oh, I lie now and then, I suppose. Sometimes I’d tell them the truth and they still wouldn’t believe me, so I prefer to lie.”

Francois Truffaut’s iconic ‘The 400 Blows’ was a clear influence on ‘Capernaum’ and its portrayal of a young, rebellious boy on the streets of Beirut. The story of a misunderstood young adolescent who turns to a life of petty crime has spawned countless imitations, rarely as good as Truffaut’s original vision, and the freeze frame at the end is as iconic an image as you’ll see in cinema.

The Dardenne brothers are Belgium’s answer to Ken Loach, famed for their naturalistic portrayals of working class life, and ‘The Kid with a Bike’ is one of their best. Telling the story of a 12 year old boy who turns to a woman for comfort after his father abandons him, it’s a heartbreaking tale of a child struggling to understand why a parent has abandoned him, told with humanity and care.

“Can you give us some change, please? The doctor said we have asthma and we gotta eat ice cream right away.”

Disneyland, Florida. Home to numerous theme parks, brightly coloured restaurants and a paradise for children, or at least some children. ‘The Florida Project’ uses this location to tell a story of people on the margins of society, living in a run down motel away from the throngs of tourists who visit the area every year. 6 year old Moonee is one of these kids who spends most of her days playing unsupervised as her mum tries to make a living. Willem Dafoe’s phenomenal performance got many of the plaudits but Brooklynn Prince (who plays Moonee) is a revelation in Sean Baker’s moving odyssey.

“I mind my own business, I bother nobody, and what do I get? Trouble.”

So this is perhaps cheating a little as ‘Bicycle Thieves’ is largely seen through the eyes of Antonio, the poor father who spends the film searching for his stolen bicycle, but the effect of the narrative on his son Enzo is the true story this film sets out to tell. Set in 1948 Rome shortly after the war, the premise is simply about the stolen bike, but the power of Vittoria De Sica’s film comes form how he shows how this theft serves to dehumanise Antonio and Enzo, and threaten their ability to survive as a family. It’s often cited in lists like this and deservedly so – worth seeking out if you’ve never seen it.

Let us know what you think of these films and if there’s any other films in this subgenre that you’d recommend for us to watch!