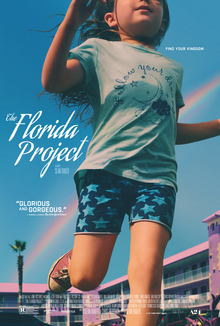 Set over one summer, the film follows precocious 6-year-old Moonee as she courts mischief and adventure with her ragtag playmates and bonds with her rebellious but caring mother, all while living in the shadows of Disney World.

Sean Baker’s follow up to his iPhone shot debut ‘Tangerine’ is a more conventional movie from a filmmaking sense, but it retains the same colourful design palette and the same empathy for characters living on the edges of society. Set during a typical hot Florida summer, ‘The Florida Project’ is about a 6 year old girl called Moonee (Brooklynn Prince) who lives with her mother Halley in a basic motel that caters primarily for extended stay residents. It follows Moonee as she messes around with her friends in the area nearby, whilst also helping her mother hustle tourists to help pay the rent. Set against the backdrop of the nearby Disney theme parks, Baker skilfully draws parallels between the booming tourism sector and the lives of these characters living on the verge of poverty, out of sight. On the couple of occasions that tourists enter this world, it’s no surprise that the differences feel more pronounced and the thematic resonance is heightened.

The majority of this environment is explored from Moonee’s viewpoint, emphasising the colour surrounding her and often shooting from low angles to put us in her shoes. It’s a film interested in showing how the actions of adults directly impact on the children involved, and this is shown to often heartbreaking effect, with the narrative having a sense of inevitably as to how things were going to play out. Brooklynn Prince gives a deeply memorable child performance as Moonee and at times you could forget she was a 6 year old kid due to her precocious nature and the way her mother treats her more like a friend. However it’s when ‘The Florida Project’ throws in moments that starkly remind you that she is just a young kid that it really excels. Like ‘Tangerine’, Baker has mainly cast relative unknowns, although he has added Willem Dafoe as the motel manager who some might say cares too much. He delivers an understated performance as a man toeing the line between following the owner’s orders and taking an empathetic and kind approach to helping the people staying at the motel, even when the two are at odds.

I was reminded of Andrea Arnold’s superb ‘American Honey’ to a degree in that both films portray people living on the fringes of modern American society, living out of motels and scrabbling around in any way they can to make a living. I wasn’t a massive fan of the abrupt (and stylistically different) ending (although I was glad that what I thought was going to happen didn’t), but this is a minor criticism about a very good film about childhood, and I was really taken by it.