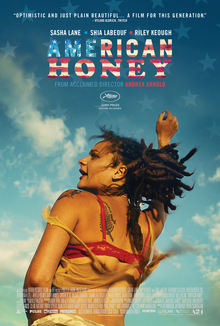 A teenage girl with nothing to lose joins a traveling magazine sales crew, and gets caught up in a whirlwind of hard partying, law bending and young love as she criss-crosses the Midwest with a band of misfits.

‘American Honey’ is a whirlwind of a road movie that successfully encapsulates the experiences of youth, in all its carefree naivety. This is the fourth film directed by Andrea Arnold, an English filmmaker with an impressive resume to date, and it could and should be the film that really breaks her through to the big leagues. The narrative of the film focuses on Star (Sasha Lane), an 18 year old who gets involved with a group of young adults who travel around the country trying to sell magazine subscriptions. This premise in a nutshell is about the American Dream in minutiae seen through these youngsters trying to make their way in modern American society and find their place in the world. The film is often less interested in plot and more focused on moments and much of the joy of ‘American Honey’ is just living and breathing alongside these characters for the duration.

The film is driven by a magnetic central performance from Sasha Lane, a newcomer who Andrea Arnold discovered on a Miami beach during spring break. In fact many of the cast are non professional actors and the film was shot as the cast and crew went on a real life road trip which only serves to heighten the realism. The main professional actor involved is Shia LaBeouf and this is a continuation of a recent run of interesting roles over the past few years. He’s excellent as Jake, one of the leading ‘salesmen’ and a guy who can be both wildly charismatic and deeply manipulative, often at the same time. It’s Star and Sasha Lane we’re continuously drawn back to though, in a performance that perfectly captures the essence of youth and despite her flaws she makes Star a character we can root for. This is a breakout role and she’s got big things ahead of her on this evidence.

Despite the lip service paid to a conventional narrative, ‘American Honey’ is never less than engrossing in its approach. Arnold chooses to shoot the film in a more boxed in aspect ratio than most modern films and this heightens the emotion and intimacy in every scene. The last film I saw that made this choice was Xavier Dolan’s excellent ‘Mommy’ and both films excel in examining their characters through their camerawork. The film is supported by an outstanding hip hop soundtrack that for the most part flows naturally from car radios and portable stereos as opposed to just playing over the top. It’s not the kind of music I’d generally listen to outwith the context of the film, but it works absolutely perfectly here and it really fits the mood. Clocking in at 162 minutes, the film probably is a little long but it never drags, and Star is a character we’re invested in and could happily follow for longer into whatever choices she makes next.

‘American Honey’ is a brilliant coming of age story featuring a stellar turn from Shia LaBeouf and a breakout performance from the terrific Sasha Lane. It’s often dreamlike in nature and sometimes a little self indulgent, but it’s hard not to think you’re watching something special with Andrea Arnold’s fourth feature to date.