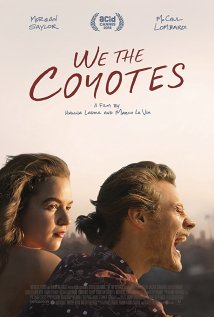 Amanda and Jake are in love and want to start a new life in Los Angeles. Will they make the right decisions? The first 24 hours of their new life take them all around the city, bringing them more surprises and frustrations than expected.

‘We the Coyotes’, a French production set in Los Angeles with a primarily American cast, is a little independent movie about a couple of young adults who move to LA in search of a future. Starring the interestingly named McCaul Lombardi (of ‘American Honey’ and ‘Patti Cake$’) and Morgan Saylor (best known as Dana Brody in ‘Homeland’), it follows a young couple from a small town in America as they spend their first 24 hours in LA, encountering several problems as they start to realise making a life there may be harder than they first thought. This is low stakes cinema, and either to its credit or its detriment depending on your perspective it doesn’t make a big deal of any of its narrative developments, choosing instead to focus on these characters as they navigate a new city and a new life.

I’ve only seen McCaul Lombardi in a couple of films previously but it’s clear he’s a talent to watch and ‘We the Coyotes’ is a solid showcase for his ability as the misunderstood ‘bad boy’ Jake, whilst Saylor develops strong chemistry with him as Amanda. I liked how the film built their relationship, eschewing the narrative journey I would have expected from a film such as this and instead establishing a natural rapport that felt realistic to the characters. It is slow paced and the film rarely attempts to get out of second gear (even as opportunities present itself, such as the towed car scenario), but there’s something affecting about this understated story of two young adults trying to get to grips with a new city and I felt many of the situations the characters find themselves in are universal to the experiences of many young people today (the interview sequence is particularly well judged).

‘We the Coyotes’ is a charming indie drama from first time filmmakers Marco La Via and Hanna Ladoul and I felt its low key approach to two lovers exploring Los Angeles was nicely played and ultimately enjoyable to watch.

Directed By: Marco La Via and Hanna Ladoul