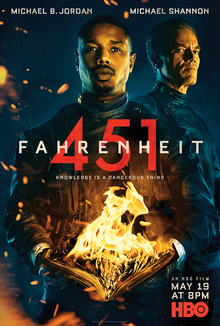 In a terrifying care-free future, a young man, Guy Montag, whose job as a fireman is to burn all books, questions his actions after meeting a young girl…and begins to rebel against society.

Ramin Bahrani directed one of my favourite films of 2015 (’99 Homes’) and Michael B. Jordan and Michael Shannon are two actors with strong recent bodies of work, so this HBO adaptation of Ray Bradbury’s 1953 novel was a film I was looking forward too. It’ll be released on HBO in America (UK details TBC) and shown on TV so the opportunity to see it on the big screen as part of the Cannes film festival was an opportunity too good for me to resist. With that background in mind, it’s doubly disappointing that ‘Fahrenheit 451’ is kind of a mess, dramatically inert and unsure of what tone to go for as it attempts to bring a 1950s sci-fi novel to the screen within a modern day setting.

The film is set several years into the future, in a world where books have been outlawed and any copies that are discovered are to be set fire to immediately by an elite group of ‘firefighters’ led by Michael Shannon’s Captain Beatty. As the film says in a cheesy voiceover “we used to put fires out, now we set them”. Guy Montag (Jordan) is one of Beatty’s leading men and he is originally introduced as a committed fanatic, only to become the film’s moral centre as he starts to learn more about the real reasons as to why they burn books. Written shortly after the Second World War had concluded, the influence and similarities to the practices of the Nazi party are apparent, and there are some solid points about censorship and sporadic strong moments (a moment between Shannon and Jordan where racist literature is referenced hits home strongly), but it mostly fails to engage and doesn’t draw its themes together in a satisfying manner. The attempts to modernise Bradbury’s novel don’t work, with the messageboard esque platform (the ‘Nine’) that spits out a series of emojis as it shows Beatty’s team at work feeling particularly misjudged, clearly standing out as the attempts of someone out of touch struggling to predict how people will interact with technology in the future.

The performances are also disappointing, with Shannon reverting to the gnarly antagonist archetype that he can play in his sleep and Jordan all over the place and never getting a handle on Guy. I’m not sure when this was filmed but it wouldn’t surprise me if it coincided with ‘Black Panther’ and Jordan’s stellar work as Killmonger on that movie, as his performance here feels like Killmonger lite and whilst that over the top approach worked superbly in ‘Black Panther’, it comes across as overacting here and removes a lot of the nuance we need to believe in his character arc.

‘Fahrenheit 451’ has been billed as a sci-fi movie that feels relevant to the modern climate but I felt it failed in its attempts to both capture that element and to work as a satisfying narrative in its own right, and despite the impressive names both in front of and behind the camera, I was really disappointed in this movie.

‘Fahrenheit 451’ was screening as part of the ‘Out of Competition’ section at the Cannes Film Festival 2018.