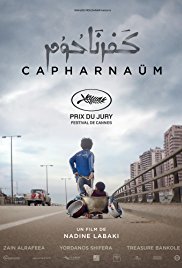 While serving a five-year sentence for a violent crime, a 12-year-old boy sues his parents for neglect.

Great films about childhood don’t come along very often, but when they do, I’m struggling to think of a subgenre that can so effectively show the power of cinema. ‘Capernaum’ is an outstanding film about childhood, specifically about childhood on the rough streets of Beirut in Lebanon, and it’s the best film I’ve seen so far this year (granted, it is only February!). The film tells the story of Zain, a 12 year old boy who we first see in front of a judge, opposite his parents in the dock. When the judge asks him “Why are you attacking your parents in court?”, he answers “For giving me life”. The film then moves back in time to tell Zain’s story, depicting the events that led him to this point and it makes for a stunning watch.

Zain (Zain Al Rafeea) lives in a flat in Beirut with his parents and lots of siblings, cramped in and all sleeping together on the floor. He’s established as a tough, resolute individual, with a protective streak for his other siblings but namely Sahar (Cedra Izam), his sister, who he fears is going to be sold off for marriage by his parents to a local shopowner. Sahar is similar ages with Zain and I found it troubling to watch her parents discuss her as a commodity, not least for the disturbing aspect that child abuse is so openly discussed and accepted in the society ‘Capernaum’ portrays. This drives Zain to run away from home, eventually finding sanctuary with an Ethiopian immigrant Rahil (Yordanos Shiferaw) and her young son Yonas (Boluwatife Treasure Bankole), who happens to be the cutest kid you’ll see on screen. The film covers themes such as the life of an immigrant through Rahil, and the struggle to survive in this part of Lebanese society, and director Nadine Labaki tells this story with intelligence and humanity. The performances of the child actors (most of them amateurs) are phenomenal, namely Zain Al Rafeea who is frankly unforgettable as Zain and I was completely entranced by his display.

There are nods to films such as Francois Truffaut’s ‘The 400 Blows’, specifically through the use of his classic freeze frame conclusion, but this is a film that stands on its own through great direction, performances and a story that had me fully invested throughout. ‘Capernaum’ is a superb film and it deserves to be seen by as wide an audience as possible.