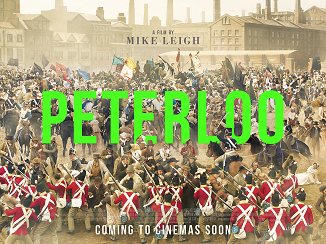 The story of the 1819 Peterloo Massacre where British forces attacked a peaceful pro-democracy rally in Manchester.

The Peterloo massacre 200 years ago at a pro-democracy rally in Manchester is an event many won’t have heard about (I certainly hadn’t), yet it played a defining role in gaining universal male suffrage and acted as a stepping stone to the freedoms we live in today. Mike Leigh’s film is one way to give more exposure to the event, and his ‘Peterloo’ is a sprawling piece of work with an ensemble cast, taking us through the lead up to the meeting at St. Peter’s Fields and the massacre itself from both sides of the class divide. Exact numbers of casualties are unknown, but out of a reported attendance of 60,000 people, 15 people were killed and 700 were injured when the government forces attacked the peaceful demonstration.

‘Peterloo’ is expertly put together by a master of his craft in Mike Leigh, with the film having a lived in, grubby feel that feels like a realistic portrayal of the conditions of the time. The cast is made up primarily of character actors and relative unknown’s, with Rory Kinnear and Maxine Peake the biggest names, and the ragged clothes and lack of make up is relatively refreshing in historical dramas. Leigh sets out to show how miserable these people’s existence was in 1819 and he achieves this impeccably. It is a particularly dialogue heavy film and I found some aspects to be a slog as Leigh introduced his themes, repeated them ad infinitum and repeated them again for good measure, but amidst these conversations he gets clear points across about the situation of the day. I particularly liked the way Henry Hunt (Kinnear) is played, with the narrative showing a man who wants to do good but often for the wrong reasons and at the expense of those who really suffered under the regime. I do think Leigh’s depiction of the ruling classes lacked nuance, portraying them as pantomime villains, not aided by unnecessarily over the top and downright distracting displays from the likes of Vincent Franklin and Tim McInnerny.

When we finally arrive at St. Peter’s Fields, more than 2 hours after the film began, the film moves from history lesson to sheer horror. The filmmakers mostly eschewed special effects and CGI to depict the massacre and the event is well rendered, as horrific as some of the imagery undoubtedly is. I’m glad I saw ‘Peterloo’ and it’s an admirable attempt to shine a light on an important, forgotten piece of British history, but I did find it hard going at times and particularly indulgent in its runtime.