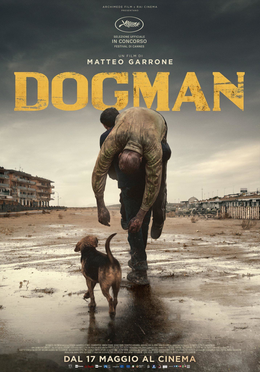 Marcello, a small and gentle dog groomer, finds himself involved in a dangerous relationship of subjugation with Simone, a former violent boxer who terrorizes the entire neighborhood. In an effort to reaffirm his dignity, Marcello will submit to an unexpected act of vengeance.

‘Dogman’, the latest film from Italian director Matteo Garrone (‘Tale of Tales’, ‘Gomorrah’) is an engrossing drama about a mild mannered dog groomer who finds himself forced into taking drastic action against a local bully. Marcello (Marcello Fonte) lives in a deprived neighbourhood on the outskirts of Rome, operating his dog grooming business and spending his free time playing football with his friends and fellow business owners, and seeing his young daughter. On the side, Marcello deals small amounts of cocaine in order to fund expensive holidays with his daughter, with one of his clients being a former boxer called Simone. Simone is the aforementioned bully, a hulking thug of a man with a drug problem who doesn’t appear to have worked an honest day in his life.

Marcello is one of those people who have a kind heart and are nice to everyone, humans and animals, often to their own detriment, and people like Simone feed off that. Simone regularly turns up unannounced, doesn’t pay for the cocaine and forces Marcello against his will to get involved in a robbery and things escalate from this point onwards for Marcello. Marcello Fonte’s expressive performance really makes you root for him, even as we know he is digging a deeper hole by refusing to acknowledge and deal with the Simone situation. The film could be loosely split into two halves, the dark comedy of the first as we follow Marcello as he gets in too deep with Simone, and the bleak tragedy of the second as Marcello loses everything and makes the kind of decision only a man who feels he has nothing to lose would make. The people on the outskirts of the story, from his daughter to his friends, are all affected by Simone’s actions either directly or indirectly, and I felt Garrone solidly showed the difficulty of finding a long term solution to the Simone problem.

I really liked ‘Dogman’. I thought it was visceral, well acted and strikingly put together, and its another fine film from Matteo Garrone.