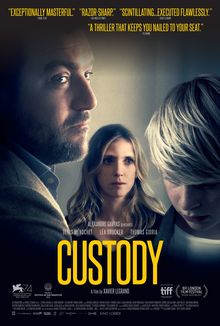 A broken marriage leads to a bitter custody battle with an embattled son at the centre.

Xavier Legrand’s ‘Custody’ is an intense drama about the custody battle between Antoine (Denis Ménochet) and Miriam (Léa Drucker) over their young son Julien (Thomas Gioria). It begins with a lengthy sequence in a custody hearing where both parents put their point of view across and we’re immediately introduced to the complexities of a situation where both individuals present the same events in different ways and at this stage, it’s hard to know who to believe. I was particularly impressed in how ‘Custody’ doesn’t follow the path I expected it too as it moves away from portraying both parents as equally to blame to something altogether more horrific, and I couldn’t take my eyes off the screen as it plays out.

The film takes place over a short space of time and this tight focus makes ‘Custody’ all the better by removing the need for backstory to establish how Antoine and Miriam’s relationship got to this stage. It means that we can only guess as to whether Antoine was always an angry, bitter man, prone to violent outbursts, or whether the circumstances of his life and his divorce drove him this way, and Denis Ménochet plays him superbly, eliciting sympathy initially until there’s none left to give. Thomas Gioria is a revelation as young Julien, caught between his parents and Legrand frames much of the action from his eye level to put us in his shoes and emphasise the pain he is going through. The film is a slow burn, introducing its characters and stakes and then escalating the situation until we reach a point of no return, with a harrowing and brutally intense final sequence leaving me on the edge of my seat with my heart thumping.

‘Custody’ is a superb hard-hitting drama from Xavier Legrand with blistering performances from its cast, taking the heartbreaking story of a young boy coming to terms with his parents divorce and ramping up the horror of the situation to unbearable levels. Clocking in at just over 90 minutes, this is a tight, smartly directed film and it’s as impressive a debut feature as you’re likely to see this year.