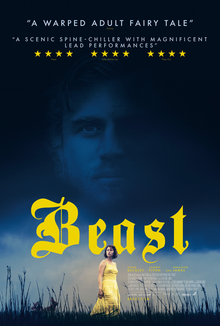 A troubled woman living in an isolated community finds herself pulled between the control of her oppressive family and the allure of a secretive outsider suspected of a series of brutal murders.

One of the best British films of the year to date, ‘Beast’, is a Jersey set psychological thriller featuring a star making turn from Jessie Buckley in the central role. The film is centered on Moll (Buckley), a 27 year old woman who still lives at home with her domineering mother (Geraldine James) and her dementia suffering father, and its clear from the outset that her life to date has been restricted by her ties to her family and the small community they live in. When she encounters a handsome stranger called Pascal (Johnny Flynn), she falls head over heels, even choosing to stand by him when he is arrested as the main suspect in a series of brutal murders, further isolating herself from her family and the wider community.

The film is the debut feature from Michael Pearce and it’s a really impressive piece of work, drawing captivating performances from Buckley and Flynn and generating an unsettling tone that helps to maintain an air of ambiguity around the narrative. The film is skilfully made and builds tension well and it works particularly well because we get a sense of why Moll would want to break free from her family, and why Pascal would be the type of person she’d be drawn too. Buckley and Flynn have great chemistry with one another and they’re easy to root for against the alternative of Moll’s snobby family, who immediately take a dislike to Pascal and other ‘outsiders’. I really liked some of the horror elements Pearce introduced towards the end, such as a great sequence in a police station with faulty lights, and it really served to amp up the intensity as the film switches gear towards the chilling conclusion.

I thought ‘Beast’ was an absorbing thriller with great performances, and even as it threatened to lose me towards the end, it pulled me back around with a fitting finale and I’ll certainly be looking out for whatever Pearce, Buckley and Flynn do next.