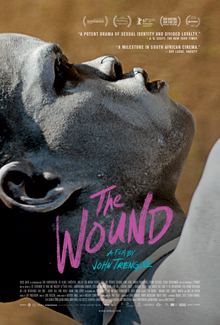 Xolani, a lonely factory worker, travels to the rural mountains with the men of his community to initiate a group of teenage boys into manhood.

‘The Wound’ is a South African film that has generated a degree of controversy in its home country, on account of its premise which focuses on a secretive initiation ceremony known as ‘Ulwaluko’. The annual ceremony takes place in the mountains of Eastern Cape with teenage boys being initiated into manhood under the supervision of older men who act as mentors or ‘caregivers’. In ‘The Wound’, we witness this ritual through the eyes of Xolani (Nakhane Toure), one of the caregivers who we soon learn uses the annual tradition to reconnect with Vija (Bongile Mantsai), another caregiver who he has a sporadic romantic relationship with. This is complicated by the arrival of Kwanda (Niza Jay Ncoyini), a young boy from Johannesburg who is more comfortable in his skin as a gay man, alongside the general homophobic attitude that pervades the community.

‘The Wound’ is a coming of age film in many respects, although Xolani is much older than most characters who you would associate with the genre. It’s a film about what it means to be a man, and even though the setting is alien to anything I’ve ever experienced or been familiar with, you can relate to the situation the characters are going through. It speaks to what it must be like to be a closeted gay man in a place where attitudes are vehemently against homosexuality and the contrast between the attitudes of Xolani and city kid Kwanda are well played out. Toure delivers a compelling performance as Xolani, embodying a man who isn’t comfortable in his own skin and as he grapples with his feelings for Vija we can understand the pain this causes him. The film was a worthy selection as South Africa’s nomination for ‘Best Foreign Language Film’ at this year’s Academy Awards and it made the December shortlist (albeit not the final selection).

‘The Wound’ is a thought-provoking film from South Africa that explores the conflict between tradition and modern values to provide an insight into another culture, and I thought it was a really good watch.