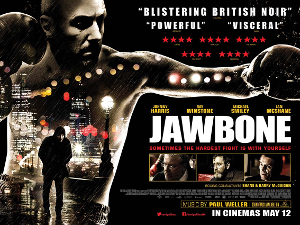 Johnny Harris is one of those faces you’re likely to recognise from a multitude of appearances in British films and TV series, but it’s in ‘Jawbone’, a film he wrote as well as stars, where his acting talents come to the fore as a leading man. The boxing movie genre is a crowded place and it takes a lot to stand out, and I think ‘Jawbone’ does, largely down to a strong focus on its main character and a narrative that puts the character at the forefront and the boxing to the background. That character is Jimmy McCabe (Harris), a former youth boxing champion who is going through a troubled time in his personal life, and the film follows his attempts to get back into boxing with the help of his old team. Whilst it sounds like a typical redemption story, that description would be slightly misleading as ‘Jawbone’ is a far more nuanced and powerful piece of work than that simple synopsis would suggest.

The film has been a passion project of Harris for some time, and he’s aided by some big names in the supporting roles with Ray Winstone, Ian McShane and Michael Smiley playing some of the key people in McCabe’s life. It’s established without the need for lots of backstory that at some point in his life, McCabe went down the wrong path, and the film picks up as he attempts to get back on track whilst fighting the challenges of addiction. Without a support network, that becomes doubly challenging and we can see that his former coach (Smiley) and gym owner (Winstone) want to help, but have clearly been burnt by his behaviour in the past. It is a boxing film, and there is a big fight and some training sequences, but ‘Jawbone’ excels in the quieter moments when grown men talk to each other about their problems (there is a phenomenal scene in particular between Harris and Winstone around the midway point). When the film reaches its own kind of conclusion, it feels like a victory, but not of the sort we’d expect, and I was impressed that Harris and director Thomas Q. Napper choose to explore a different angle of a well worn genre.

Disappointingly, ‘Jawbone’ had a very limited release and didn’t appear in multiplexes or even the arthouse cinemas near to me (I live in Edinburgh and generally can’t complain at the choice, hence my disappointment here). I’m glad I checked it out on its release on DVD and I hope more people check out this very fine boxing movie now it’s widely available for home viewing.