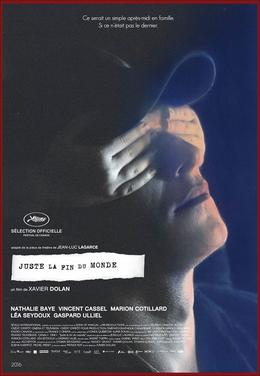 Louis (Gaspard Ulliel), a terminally ill writer, returns home after a long absence to tell his family that he is dying.

Profilic Canadian director Xavier Dolan’s sixth film opened to polarizing reviews on its screening at the Cannes film festival last year, with these mixed reviews continuing on its general release in various territories across the globe. Having finally caught up with it after loving Dolan’s last film (‘Mommy’) I’m a little confused at the mixed reaction for a film that for me, fails to hit the mark consistently enough but wasn’t bad enough to warrant such strong negative reactions.

The film takes place almost entirely at a family gathering as Louis (Gaspard Ulliel), a 34 year old playwright with a terminal illness, returns home to face his family for the first time in a number of years. The characters are all loosely developed archetypes, depicted by celebrated French performers such as Marion Cotillard, Vincent Cassel and Nathalie Baye, and the film mostly depicts the bickerings of a family who don’t really like one another. It’s in the spirit of great films about dysfunctional families such as Thomas Vinterberg’s ‘Festen’ or even Wes Anderson’s ‘The Royal Tenenbaums’, but it too often turns into a shouting match (Vincent Cassel’s Antoine is particularly frustrating to watch in this regard) and I felt there was very little to take away from the conflict beyond a dislike for everyone involved. I like the way in which Dolan uses popular music to punctuate key moments in his films and he frequently does that here successfully, but it’s difficult to care when you neither like or empathise with any of the characters.

Dolan is still a talented young filmmaker with a unique style that grabs your attention, and whilst ‘It’s Only the End of the World’ is not a complete misfire, it is a disappointing piece of work given the excellent cast and the high standards he has set for himself.