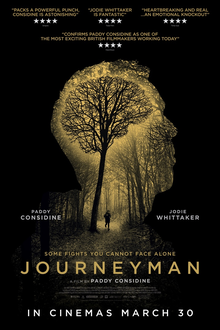 Boxer Matty Burton suffers a serious head injury during a fight. It is about the impact this has on his marriage, his life and and his family.

In sporting terms a journeyman is someone competent or good at their job, but perhaps not at an elite level, and it’s an appropriate title for Paddy Considine’s second feature as writer-director where he plays Matty Burton, an aging boxer preparing for retirement after a solid, if unspectacular career. I like a good boxing drama but they do tend to be amongst the most formulaic of films, usually starting with a loss then building back up to the triumphant victory at the end, but ‘Journeyman’ is telling a different kind of story. When we first meet Matty, he’s preparing for a title fight after becoming champion by default after his previous opponent pulled out, and he seems a man unsure of himself and his legacy in the sport. Shortly after the fight he collapses and ends up in a coma in hospital, with the film then tracking the long, difficult journey he faces to recovery and it’s beautifully played out by Considine and Jodie Whittaker as his caring wife Emma.

When it comes to bleak drama you won’t find many countries that produce as much good work in this arena as us Brits and ‘Journeyman’ certainly falls into this category (not a surprise having recently rewatched Considine’s excellent, harrowing debut feature ‘Tyrannosaur’) as Matty’s arduous recovery is depicted. It’s an incredibly hard watch at times and it does lose some momentum in the middle part, albeit the committed performances from Considine and Whittaker held my attention. It’s a lot more thoughtful than most boxing dramas and it shares some similarities with another British independent film about boxing from last year – the underrated and underseen ‘Jawbone’ with Johnny Harris.

Considine is great but I felt Whittaker was the real star of the show, whether it was her increasing pain at losing the person she loved to a debilitating condition or her barely concealed anger at his ‘friends’ who abandoned him when he needed them most. Matty’s friends do come into it more towards the end as he starts to recover and I felt the film had a nicely judged conclusion, soundtracked to Nick Cave’s ‘Into My Arms’. ‘Journeyman’ is a solid follow up to the superb ‘Tyrannosaur’ from Paddy Considine and I’ll be intrigued to see what he comes up with next.