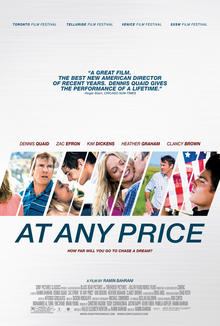 A farming family’s business is threatened by an unexpected crisis, further testing the relationship between a father and his rebellious son.

Ramin Bahrani’s fourth feature was actually released in the US back in 2012 but it’s only just got a release in the UK, coming after Bahrani’s fifth feature ’99 Homes’ came out on this side of the pond in September last year. ’99 Homes’ was the main reason I wanted to see this film, given it was my 3rd favourite film of last year, and whilst ‘At Any Price’ isn’t close to the level of that film, it’s a solid watch with a couple of key aspects worth recommending.

The film begins by introducing us to Henry Whipple (Dennis Quaid), a man who owns a significant farming empire. We meet him alongside his son Dean (Zac Efron), as they prepare to go to the funeral of a business competitor, where we learn a lot about both men in a short five minute sequence. The film is primarily centred around Henry’s relationship with Dean, who he wants to remain in the family business, but Dean has other ideas and wants to pursue a career as a NASCAR driver. This isn’t anything we haven’t seen before, but Efron and Quaid both put in strong performances to make their conflict believable. Dennis Quaid in particular is excellent in the lead role as a single minded father and businessman who values business success above anything else. He manages to bring a kind of brutish charisma to the man despite behaving despicably on several occasions and Quaid’s portrayal helps us to understand why this man acts as he does.

The subject matter is quite dry and there’s a lot of talk about GMO crops and farming that Bahrani struggles to get across to a layman, and that’s perhaps the reason he litters the film with melodramatic moments and a couple of twists that don’t feel entirely believable within the world established. The film becomes weaker when it moves into soapier subplots and they feel at odds with the grittier narrative that is established at the start, and this is where the film starts to falter. Some of the plot developments strain credulity and I found the way the film concluded to be unsatisfying. Overall, ‘At Any Price’ is a solid drama with a superb Dennis Quaid performance at its core, but Bahrani struggles to draw you into the world of modern agriculture and the final product suffers as a result.