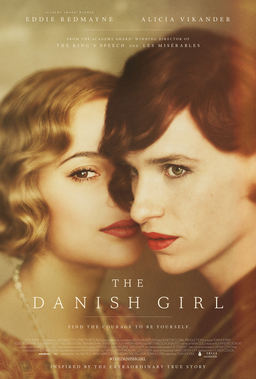 A fictitious love story loosely inspired by the lives of Danish artists Lili Elbe and Gerda Wegener. Lili and Gerda’s marriage and work evolve as they navigate Lili’s groundbreaking journey as a transgender pioneer.

‘The Danish Girl’ is a timely true life story with two excellent central performances that help to overcome a dull presentation and a story that fails to truly ignite. The film tells the story of Danish painter Lili Elbe (Eddie Redmayne), one of the first known recipients of sex reassignment surgery, with the focus split between the transformation of Einar Wegener into Lili, and the impact on Einar’s wife Gerda (Alicia Vikander) as she comes to terms with her husband’s feelings. The story is groundbreaking, but performances aside I didn’t find it all that compelling.

The film is carried entirely by two impeccable central performances from Eddie Redmayne and Alicia Vikander, who are both utterly magnetic throughout. Like ‘The Theory of Everything’ last year, Redmayne is likely to get most of the plaudits, but the woman opposite him (like Felicity Jones) is equally as good. Vikander first came to my attention with an excellent performance in the Danish film ‘A Royal Affair’ opposite Mads Mikkelsen and she’s only grown in stature since, with a mesmerising turn in last year’s ‘Ex Machina’ the standout. In ‘The Danish Girl’ she is truly compelling as Gerda, expertly portraying her inner conflict as she struggles to come to terms with the transformation within the person she loves. Redmayne himself is outstanding, looking almost uncomfortable in Einar’s body from the beginning yet growing in confidence throughout the narrative as he begins to fully become Lili. It’s a transformative, raw and vulnerable performance and it’s likely to lead to another ‘Best Actor’ nomination.

I found the film took a lot of time to get into and I think that’s largely down to Tom Hooper’s direction and for the most part this is dull from a production perspective. After all, this is a man that managed to make the French Revolution look like a street brawl in ‘Les Miserables’ and the dull colours and settings fail to spark the story into life. Despite spending time in some of Europe’s most scenic cities in Paris, Copenhagen and Dresden, the locations are uninspired and the cinematography fails to bring the cities to life. There are moments of inspiration scattered throughout, such as a candid display of openness from Lili at a peep show where the framing of the camera through the reflection of the glass is truly enlightening, but it’s too infrequent to draw you in. Hooper has two outstanding performances at the heart of his film, alongside a strong group of supporting actors such as Matthias Schoenaerts, Ben Whishaw and Sebastian Koch, yet too often he doesn’t do enough to compliment them.

‘The Danish Girl’ is worth seeing for the phenomenal performances and the depiction of a fascinating true life tale, but the film never truly captivated me.