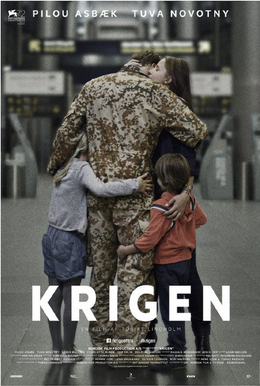 Company commander Claus M. Pedersen (Pilou Asbæk) and his men are stationed in an Afghan province. Meanwhile back in Denmark Claus’ wife Maria (Tuva Novotny) is trying to hold everyday life together with a husband at war and three children missing their father. During a routine mission, the soldiers are caught in heavy crossfire and in order to save his men, Claus makes a decision that has grave consequences for him – and his family back home.

The latest film from Danish director Tobias Lindholm, ‘A War’ is a superb moral thriller focusing on the dubious actions of a commander during a mission in Afghanistan, and the impact that has on his family back home. The film explores the murky territory of war and the blurred lines between right and wrong when soldiers are put into extremely difficult situations, with our viewpoint into this through our protagonist Claus (Pilou Asbæk), a commander in the Danish military who makes a decision whilst under heavy Taliban fire that leads to him being accused of committing a war crime. The first half of the film is a war drama, the second half a legal thriller. Both are nailbiting and tense in their own ways.

Lindholm’s previous work has included writing the script for the excellent Mads Mikkelsen drama ‘The Hunt’ and directing 2013’s ‘A Hijacking’ and both of these films share much of the same DNA as ‘A War’. All three of these films are deeply moral thrillers that provoke thought in the audience and make us question how we would react in similar situations, and they mark Lindholm out as a real talent to watch. ‘A Hijacking’ came out at a similar time to Tom Hanks starring ‘Captain Phillips’ which covered a similar subject matter and the two films were an interesting showcase for the different approaches to filmmaking in Europe and Hollywood. Both were excellent films but the key difference between the two was that ‘A Hijacking’ was focused more on the negotiations than the traditional thriller aspects of the premise. ‘A War’ is fairly similar in the respect that it’s keenly focused on procedure and the nuts and bolts of the situations the soldiers find themselves in. This grounding becomes important later on when Claus actions under heavy enemy fire are questioned.

Lindholm has brought many of his cast members from ‘A Hijacking’ back, with our protagonist Claus (Pilou Asbæk), his second in command Najib (Dar Salim) and his attorney (Søren Malling) all featuring in key roles. Asbæk in particular really comes into his own in the second half of the film when we can see the consequences of his actions starting to weigh heavily on his mind. Tuva Novotny is also excellent as Asbæk’s partner, which is particularly crucial as ‘A War’ spends a fair amount of time back in Denmark with Claus family. This is important in showing the impact Claus actions have on his wife and his children and emphasises the far reaching nature of war beyond the people directly involved in a conflict.

‘A War’ moves towards a conclusion and an outcome that opinions will likely vary on, but it would be difficult to deny that it feels true to the story Lindholm is trying to tell. This is intelligent cinema that takes a challenging issue and creates a compelling and well made drama out of it, and I can’t wait to see what Lindholm comes up with next.