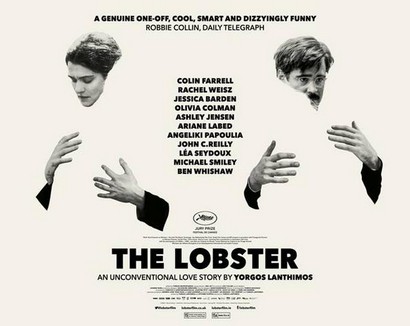 In a dystopian near future, single people, according to the laws of The City, are taken to The Hotel, where they are obliged to find a romantic partner in forty-five days or are transformed into beasts and sent off into The Woods.

‘The Lobster’ is an incredibly funny, eccentric satire of the modern relationship that stumbles as it approaches the half way stage. Very much a film of two halves, the first hour produces one of the best films of the year, funny and wickedly biting in its satire. The second on the other hand, throws this away to an extent with a dull, moody journey into the forest that isn’t nearly as engaging or compelling. In hindsight, the first hour could have worked as a ‘Black Mirror’ esque dark TV episode, or a shorter film if a different ending had been attached. This would have been better in my opinion.

The first half of the film (let’s call it the hotel) delivers on the terrific premise in strange and surprising ways, as Colin Farrell’s schlubby David checks in at a resort for singles, where singletons must find a partner within 45 days or be turned into an animal of their choice (the title should make sense here). ‘Guests’ can earn more days on their stay by tracking down other guests who have tried to escape, helping to contribute to the moribund atmosphere around the place. The performances are deadpan from a series of enjoyable performers, with some hilarious vignettes as director Yorgos Lanthimos goes about deconstructing the idea of the relationship and its importance in conforming to societal norms. When desperation sets in, the behaviour from several of the character’s becomes increasingly extreme but entirely realistic within the narrative guidelines set (one moment with Farrell and a child is the funniest thing I’ve seen in a long time!)

The second half of the film (we’ll call this the forest) moves away from the hotel setting into a group of ‘loners’, the title given to those who have managed to escaped the hotel and avoid the fate of being turned into animals. There are inspired moments of madness here, but the film loses its way a little and I’m not entirely sure on the point Lanthimos was trying to make. Is his point that the loners can be just as cruel and apply to as many rules as the hotel staff (representing society as a whole)? Overall this section just doesn’t feel as neat or as funny, and strong work from Lea Seydoux and Rachel Weisz can’t fully overcome this.

Colin Farrell anchors the film and his performance here is an example of the kind of work he can produce away from the more mainstream Hollywood fare. He’s put on weight for the role, grown an unappealing moustache and his attempts to strike up communication with fellow guests are hilarious in their awkwardness. The film is full of inspired moments of dry humour, as the actors fully commit to playing the ridiculous scenario completely straight, with a perfect example coming as David is asked questions on checking in in a fashion similar to a doctor’s checklist. This is bold filmmaking from Yorgos Lanthimos and he successfully draws out the absurdity of his setting in consistently moving ways, and it’s thrilling to watch the narrative unfold.

‘The Lobster’ never fully delivers on its premise, with a disappointing second half dulling the super opening hour, but this is still a weird and wonderfully eccentric piece of original cinema that I would highly recommend checking out.