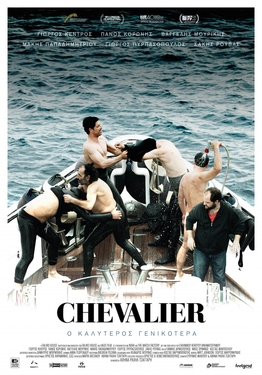 In the middle of the Aegean Sea, six men on a fishing trip on a luxury yacht decide to play a game. During this game, things will be compared. Things will be measured. Songs will be butchered, and blood will be tested. Friends will become rivals and rivals will become hungry. But at the end of the journey, when the game is over, the man who wins will be the best man. And he will wear on his smallest finger the victory ring: the Chevalier.

I’m not particularly familiar with Greek cinema, but given ‘Chevalier’ was compared favourably to last year’s flawed but often hilarious oddity ‘The Lobster’ (from the Greek director Yorgos Lanthimos), and had picked up a couple of awards at film festivals, I was suitably intrigued to check it out. Disappointingly, this is a dull, aimless movie about six men on a fishing trip who decide to play a game to liven up proceedings. The purpose of the game is focused around a variety of challenges, both mental and physical, with points allocated to those who are deemed to perform the best, and the ultimate winner is the beneficiary of the titular Chevalier signet ring. The premise has promise, but its delivery is mundane and dull, and I found it incredibly difficult to understand what they were going for. Perhaps Greek comedy is not for me!

The overarching theme appears to be looking at the often toxic nature of manhood and masculinity and how this can manifest itself in a male only environment, but the observations seem lazy and trite. There are statements to be made about this subject, and its refreshing seeing this come from the viewpoint of a female director, but Athina Rachel Tsangari doesn’t delve into this deeply enough to deliver a worthwhile critique on the subject. There are some amusing moments, such as outsider Christos miming to a song and a competition to build IKEA furniture (much like an oversized Jenga game), but the film never goes for the jugular and instead almost peters out, when ramping up the absurdity would have yielded stronger returns. ‘Chevalier’ is a film that could have done with a bit more outrageousness to deliver on its promise, but the tasks and outcomes are relatively tame and I found the laughs hard to come by.

‘Chevalier’ is too content to just let things happen when a surer hand would have driven more conflict out of the setting and the narrative, and whilst the cast are game and flashes of absurdity enliven the film at times, ‘Chevalier’ mostly floats along as aimlessly as the yacht the characters are on.