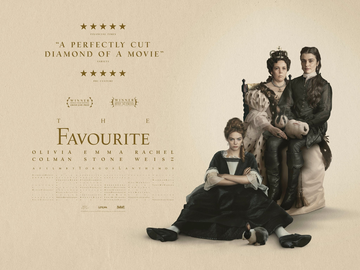 In early 18th century England, a frail Queen Anne occupies the throne and her close friend, Lady Sarah, governs the country in her stead. When a new servant, Abigail, arrives, her charm endears her to Sarah.

Yorgos Lanthimos is a director whose previous work (that I’ve seen) I’ve found easy to admire but hard to love and his latest film, ‘The Favourite’, also falls into this category, although I think it’s probably my favourite (no pun intended!) film of his, give or take the superb first hour of ‘The Lobster’ before it lost my interest. That is largely down to the quality of acting from Olivia Colman, Emma Stone and Rachel Weisz, who really raise what could have been a stuffy period piece into an engaging and often hilarious piece of work. This is perhaps a slightly more accessible film from Lanthimos compared with his prior works, however there’s still time for his offbeat stylings to come through as we’re treated to racing ducks, bizarre dancing and a collection of pet rabbits that the Queen seems to trust more than any individual (with good reason!).

Set in the 18th century during the relatively short reign of Queen Anne (Colman), the film centres on two cousins jockeying for favour with a Queen who has lost interest in governing amidst a serious bout of ill health. Those two are Lady Marlborough (Weisz), the Queen’s closest confidante and secret lover, and Abigail Hill (Emma Stone), a former noble who lost her titles due to her father gambling away the family’s estate. The battle of wits between the two woman vying for the Queen’s attention is played out superbly, with both not against using underhand tactics or manipulating the men around them to succeed in their aims. Olivia Colman is getting all the plaudits for her stellar display as a Queen Anne riddled with gout (emphasised through a throbbing score that is as effective as it is painful to listen to), but I thought Emma Stone really stood out as the subtly manipulative Abigail, and all three of the leading trio are hilarious and perfect in their roles.

Like the previous films of Yorgos Lanthimos, I felt ‘The Favourite’ was difficult to fully embrace, but the sharp dialogue, humour and outstanding performances made this a very enjoyable watch, and Lanthimos remains one of the most intriguing directors in the business.