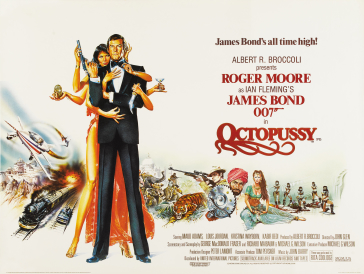 A fake Fabergé egg and a fellow agent’s death lead James Bond to uncover an international jewel-smuggling operation, headed by the mysterious Octopussy, being used to disguise a nuclear attack on N.A.T.O. forces.

You must be joking! Double-0 seven on an island populated exclusively by women? We won’t see him till dawn

‘Octopussy’ ultimately feels like a bit of a mixed bag for me, with a generally strong narrative saddled by some disappointing choices that literally have Roger Moore acting the clown. To begin with, ‘Octopussy’ develops an intriguing narrative that returns to the Cold War setting of the early Connery films, introducing a smuggling plot that has Bond following a rogue Soviet general. This takes Bond to various exotic locales, particularly in India, as he tracks the general (Steven Berkoff) to the palace of an exiled prince, Kamal Khan (Louis Jourdan), and his associate, Octopussy (Maud Adams). Tonally the film feels off, as a serious plot is mixed with silliness that feels out of place in this outing.

It’s clear at this stage that Roger Moore is starting to push the boundaries of believability as the legendary spy, with his age clearly becoming a negative factor for his performance. He still has the charm, but he struggles with the action sequences and ends up relying too much on quips and comedy to get through. Indeed, this would be his penultimate encounter, and it’s one of his weaker performances. Many of the films strong elements are stifled by the filmmakers need to create comedy, such as putting Bond in a gorilla costume and a clown suit, or by having him swing through the trees as he escapes from some henchmen. Ironically these moments aren’t generally that funny, and there’s been bigger laughs in some of the more ‘serious’ films in the series. It’s particularly disappointing that they felt the need to push for laughs when the film has its share of strong action sequences, such as an exciting set piece on top of a train (which no doubt influenced a similar scene in ‘Skyfall’), and a story solid enough to maintain interest.

I liked Louis Jourdan as Kamal Khan, and I felt he bounced well off Roger Moore’s Bond. Less a megalomaniac than some of Bond’s classic enemies, Khan seems fairly practical and economical and I felt Jourdan’s suave demeanour created some memorable scenes throughout the course of the film. The smuggling plot was reasonably well orchestrated and unravels in a satisfactory way, albeit it did feel like it was cobbled together with elements from previous entries in the series. Maud Adams (38 at the time) plays the titular Octopussy, and it’s clear at this stage that even the people behind the scenes understood that they couldn’t have the then 55 year old Roger Moore seducing 20 year olds. I liked her performance, but she’s another Bond girl who behaves and reacts in whichever way Bond or the script requires, ignoring her introduction as a sophisticated smuggler in her own right.

Overall I didn’t find ‘Octopussy’ to be nearly as weak as I’d expected and I still have fond memories of the film from seeing it in my childhood, but if anything, it emphasises that Roger Moore’s time should have been up earlier. Next up, his final film, ‘A View to a Kill’.