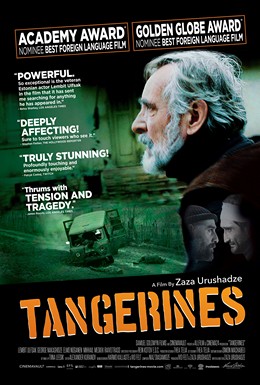 War in Georgia, Abkhazia region in 1992. An Estonian man Ivo has stayed behind to harvest his crops of tangerines. In a bloody conflict at his door, a wounded man is left behind, and Ivo is forced to take him in.

One of this year’s nominations for ‘Best Foreign Language Film’ at the Academy Awards, ‘Tangerines’ is a powerful anti-war film that successfully delivers its message in a subtle and low key manner. The story takes place in the early 90s during the War in Abkhazia, focusing on a rural village populated by Estonians amidst disputed territory after the fall of the Soviet Union a couple of years earlier. As most of the Estonians who lived in the area had returned to their homeland, two farmers remained to tend a tangerine orchard (hence the title). When the war comes to their doorstep, Ivo (Lembit Ulfsak) and Margus (Elmo Nuganen) are forced to get involved after a shootout between rival forces leaves two men wounded, but alive; one Chechen mercenary, and one Georgian volunteer. As Ivo tries to treat the wounded soldiers, their repeated threats to kill each other force him to secure a pledge from both men not to seek revenge under his roof.

Over the film’s short run time, Ivo manages to talk to the two men and through the art of appeasement they start to see a different side to the conflict. Ivo is a simple man who sells tangerines, and he’s superbly played by Lembit Ulfsak, an elderly Estonian actor who has rarely ventured away from his own country (not too dissimilar to the character he’s representing). He superbly conveys a man who is world weary and who understands the futility of war, and this is contrasted well with the hot blooded young men lying wounded in his cottage. A revelation helps us to understand why Ivo feels the way he does, and the film draws out the difference in experience and how time can affect how one looks at the world. The film is bleak, but there are uplifting aspects and there are moments of humour scattered throughout. The final conversation between Ivo and Ahmed (Giorgi Nakashidze) is an incredible showcase for both actors that succinctly sums up the themes of the film.

Ultimately the film is about the futility and pointlessness of war and the hatred that often fuels conflict. Anti-war films aren’t exactly new, but ‘Tangerines’ feels fresh and original, and this is a moving piece of world cinema, well worth your time.