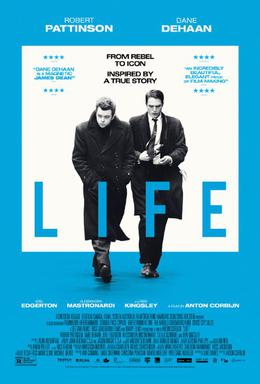 A photographer for Life Magazine is assigned to shoot pictures of James Dean.

The latest film from Anton Corbijn is a loose biopic of James Dean (Dane DeHaan) that focuses on a small period of his life before the release of his first film, ‘East of Eden’, when he was on the cusp of becoming famous. Despite the focus on Dean, our real viewpoint is photographer Dennis Stock (Robert Pattinson), who sees something in Dean after chancing upon him at a party, and forming a kind of friendship built on both parties feeling the other could elevate their careers. Given Corbijn’s background in photography, his interest in Stock’s perspective is unsurprising, and his film is as interested in what makes Stock tick as Dean. The film is relatively low key, focusing on an early and fairly inauspicious period in both men’s life, but it does allow for a deeper exploration of what makes both men tick.

As James Dean, Dane DeHaan starts off slowly, and I felt in the early stages he was almost trying too hard to depict the effortless cool of Dean, but he grows into the part and adds another strong outing to an impressive resume. It’s Robert Pattinson who really shines though, continuing to surprise with his ambitious role choices post-‘Twilight’ and after great performances in ‘The Rover’ and ‘Maps to the Stars’ from last year, his portrayal of Dennis Stock is another to add to the list. The supporting cast features several familiar names such as Ben Kingsley as studio boss Jack Warner, and Joel Edgerton as Stock’s boss, but this is really a two hander focusing on two young men coming to terms with their place in the world.

The film drifts at times and the narrative isn’t always compelling, but the performances keep things interesting and Corbijn’s passion for photography comes through in the stylish direction. Not essential, but fans of Corbijn’s previous work or James Dean aficionados will find much to enjoy.