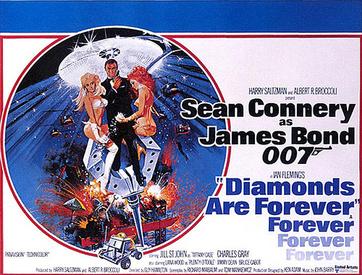 A diamond smuggling investigation leads James Bond to Las Vegas, where he uncovers an extortion plot headed by his nemesis, Ernst Stavro Blofeld.

The final Bond film to feature Sean Connery (who returned after George Lazenby’s only performance in ‘On Her Majesty’s Secret Service’), ‘Diamonds Are Forever’, is a limp end to his spell as the famous spy. In one of the more forgettable Bond movies, it’s perhaps telling that beyond a stunning car chase in Las Vegas, the most memorable thing about the film is Shirley Bassey’s booming theme song. As the title perhaps suggests, the film is about Bond’s attempts to infiltrate a diamond smuggling ring which leads him back into conflict with his old adversary, Blofeld, who has moved on to his latest plan for world domination. The film lacks the spectacle of the finest entries in the series and the increased silliness combined with a convoluted plot makes this a particularly disappointing entry.

The Sean Connery of ‘Diamonds Are Forever’ is not the same Sean Connery that burst on to the scene with his charismatic display in ‘Dr. No’, with the larger paycheck perhaps draining the enthusiasm from his performance. Whilst the script has James Bond behaving in the same way and saying the same things as always, there’s a phoned in feeling to Connery’s delivery and it’s missing the spark required to make things tick. Despite this film only coming four years after his last appearance in ‘You Only Live Twice’, Connery looks noticeably older and if that film wasn’t enough to suggest it was time for a new man in the role, ‘Diamonds Are Forever’ makes it certain. Connery’s performance isn’t the only thing that makes this film particularly dismal, as he’s paired with one of the weaker Bond girls in Jill St. John’s Tiffany Case, who is attractive but never more than a pawn in the game played between the men. This isn’t particularly unusual for a Bond girl to be treated as an afterthought (beyond appearance of course), but coming after the excellent Diana Rigg in ‘On Her Majesty’s Secret Service’ her flat performance is emphasised. Unfortunately, Rigg’s Jill Draco and the events at the end of ‘On Her Majesty’s Secret Service’ are largely ignored.

For the third film running, Ernst Stavro Blofeld is the primary antagonist, and once again he is played by a new actor (rivalling Felix Leiter for the frequency of portrayals at this stage!). On this occasion, he is played by Charles Gray (who had a minor part as an ally of Bond’s in ‘You Only Live Twice’), who is serviceable in the role and the film does become more entertaining once the script veers away from the diamond smuggling aspect to focus squarely on Bond and Blofeld’s battle of wits. In terms of recasting, I can only assume that attitudes in the 60s and 70s were a little bit more relaxed (and contracts a little more lax) than nowadays, where studios and directors seek to avoid recasting at all costs. In terms of the characters in ‘Diamonds Are Forever’, I’ve left the most ridiculous to last. Of course I’m referring to the two henchmen, Mr. Wint and Mr. Kidd, who I presume were intended as light relief and not as a serious threat to James Bond. Played by Bruce Glover and Putter Smith, the henchmen have a ridiculous look that comes somewhere between 70’s pornstars and farmers, and their dialogue mostly consists of trading jokes after killing their victims. More than anyone else these characters epitomise the campy tone of ‘Diamonds Are Forever’, and they feel a world apart from the cold, calculated killers that Bond had faced to date.

Overall, ‘Diamonds Are Forever’ is a disappointing entry in the Bond series, combining a boring script with some weak performances and a lack of spectacle. Beyond the chase sequence in Las Vegas, there’s little to recommend here and it’s an unremarkable end to Connery’s reign.

Next, Roger Moore debuts in ‘Live and Let Die’, and we trade a villain searching for world domination for something a bit smaller scale…