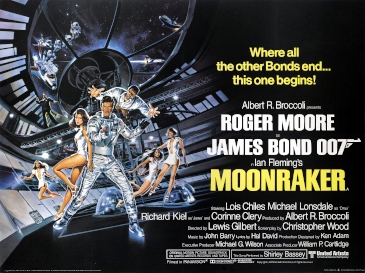 James Bond investigates the mid-air theft of a space shuttle and discovers a plot to commit global genocide.

Mr. Bond, you persist in defying my efforts to provide an amusing death for you.

After Roger Moore’s best outing as the legendary spy in ‘The Spy Who Loved Me’, ‘Moonraker’ feels like a bit of a downgrade, despite everything becoming bigger and more bombastic. Capitalising on the popularity of ‘Star Wars’, ‘Moonraker’ became the 11th James Bond outing ahead of the previously planned ‘For Your Eyes Only’ (which would be the 12th), with its space setting tapping into an audience desire for galactic adventures. This came through in the box office, with ‘Moonraker’ becoming the highest grossing film in the series to date, and remaining so until Pierce Brosnan’s debut in ‘Goldeneye’ 16 years later. The production design and special effects are the highlight of the film, but it isn’t enough to overcome the stilted dialogue, mediocre action scenes and a disappointingly bland narrative.

The film builds off ‘The Spy Who Loved Me’ by introducing us to another megalomaniac villain with a plot to destroy the earth and form a new civilisation, substituting space for underwater on this occasion. The villain on this occasion is Hugo Drax, who is well played by Michael Lonsdale, doing his best to insert some venom into his character’s poorly scripted dialogue. Drax talks too much and dances around dealing with Bond to the extremes (even for a Bond villain!), and his ploy and character seems cobbled together from previous Bond films. The focus on the space setting leans into the series worst tendencies and ‘Moonraker’ is reliant on too many cheesy comedic moments and quips from Roger Moore to drive the fast paced plot. To a certain extent the plot moves too fast, barely allowing time for each scene to breathe as we dash from location to location and set piece to set piece. The recent ‘Mission: Impossible’ outing, ‘Rogue Nation’, showed how this can be done to great effect if the action scenes are memorable and the character work strong, but ‘Moonraker’ fails in this regard. The comedic tone does allow for one of the series best lines from Desmond Llewelyn’s Q, as Bond and Holly Goodhead (Lois Chiles) ‘re-enter’ earth’s atmosphere towards the films conclusion.

Richard Kiel returns as Jaws this time, but he doesn’t feel as threatening here, nor is his arc satisfactory, perhaps signifying that he’d have been left as a memorable one film henchman similar to the likes of Oddjob from ‘Goldfinger’. The film’s theme tune is disappointing given Shirley Bassey’s excellent work on ‘Goldfinger’ and ‘Diamonds are Forever’, although John Barry’s return after missing out on ‘The Spy Who Loved Me’ is welcome and his soundtrack works well with the space setting. As we approach the conclusion we’re treated to an over the top finale set in outer space and whilst it’s clear no one was going for grounded here, it does stretches the credibility a little too much, though it does provide the opportunity to revel in Ken Adam’s outstanding production design and to treat us to special effects which were groundbreaking at the time (and showed where the film’s lofty budget went!).

‘Moonraker’ is arguably the most outlandish entry in the Bond series, and whilst it has its moments, ultimately it fails to entertain as well as intended with the attempts to merge the traditional spy narrative with science fiction falling short. ‘For Your Eyes Only’ will follow, as Bond gets back to the basics.