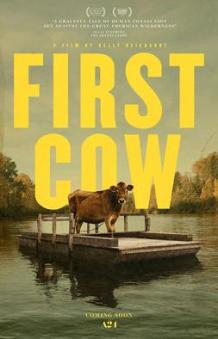 A skilled cook has traveled west and joined a group of fur trappers in Oregon, though he only finds true connection with a Chinese immigrant also seeking his fortune. Soon the two collaborate on a successful business.

Many will tell you that the western movie is a genre that has had its time and in some respects they may be correct, as shown by the diminishing frequency of westerns that are being produced year on year in the United States. Kelly Reichardt makes a strong case that there are many stories left to tell in this setting yet with ‘First Cow’, her latest film, and her second visit to 1800s America after ‘Meek’s Cutoff’. Reichardt has been producing good, underrated and underseen work for a while now and ‘First Cow’ is another enjoyable movie with perhaps a dash more humour than I’ve noticed in her previous work.

Besides a brief opening where a dogwalker discovers a couple of long buried skeletons, the film takes place in 1820s Oregon, at a time when the United States of today was a distant dream. It follows two men, a chef called Cookie (John Magaro) and a Chinese immigrant called Lu (Orion Lee), who happen upon one another and form a partnership with the aim of making enough money to help fulfil their respective goals. This method of making money involves stealing the milk of the only cow in the territory, using it to make baked goods, and selling them on for a profit, and it turns out to be a lucrative moneymaker. The cow belongs to the Chief Factor (Toby Jones), who also develops a taste for the biscuits and recruits the two men to bake for him, unaware that the scam they’re running is the reason why his cow’s milk supply is drier than it should be. There is some solid laughs derived from this premise and this adds a sense of pathos to the inevitable discovery of what they’ve been up too, and the subsequent chase as the men try to evade justice.

‘First Cow’ is another example of Kelly Reichardt’s fine ability as a storyteller, with strong performances and a premise that adds some levity to the struggle to make a living often depicted in westerns. At its heart it’s a simple tale, well told, and you can’t ask for much more than that.