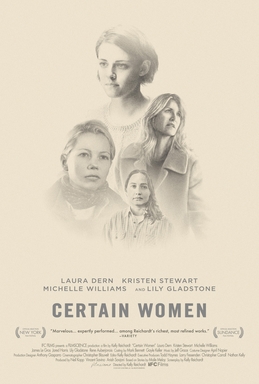 The lives of three women intersect in small-town America, where each is imperfectly blazing a trail.

‘Certain Women’ is a sporadically enjoyable film that attempts to tell low stakes stories about three women with intersecting lives in a small Montana town, and its strengths and weaknesses both lie in this style of storytelling. Each of these three women has their own arc, capturing particular moments in their lives, with minimal crossover between the stories within the narrative. Those women are Laura Dern’s lawyer, dealing with a disgruntled client (Jared Harris); Michelle William’s Gina, a woman attempting to build a new family home from scratch; and Lily Gladstone’s Jamie, a lonely ranch hand striving for connection with a young lawyer (Kristen Stewart) she encounters. The beauty of ‘Certain Women’ is in following these women as they attempt to navigate different challenges in their lives, and amidst the slow burn are fleeting moments of poetry.

It’s a rarity to see a film committed to telling these slice of life stories from a female viewpoint and it’s great to see a filmmaker so committed to that vision, even if the end result isn’t always as engaging as I’d like it to be. I felt the third segment was the strongest, and that’s largely down to a quietly affecting performance from newcomer Lily Gladstone, who really sells the sense of longing she has for Kristen Stewart’s character in a display that relies almost entirely on her depicting the character’s emotions internally. The first two segments have their moments, such as a meeting about sandstone between Gina, her husband, and an older man, where I felt Reichardt’s script and direction was telling about attitudes towards older people from people younger than them. If the segments aren’t connected narratively, they share more in common thematically, although this isn’t the kind of film to spell out its message, with most of the themes delivered subtly through the subtext that undercuts most of the scenes.

‘Certain Women’ is a quiet drama depicting small town life in America from the viewpoint of three women, all performed superbly by the trio of Dern, Williams and Gladstone (Kristen Stewart as well). It is slow, and at times I did wish it had a little more pace to it, but it is a nice little film to get swept up in.