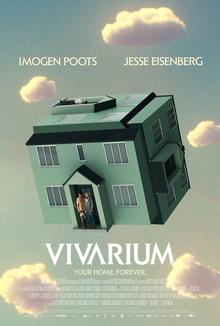 A young couple looking for the perfect home find themselves trapped in a mysterious labyrinth-like neighborhood of identical houses.

Starring Imogen Poots and Jesse Eisenberg, ‘Vivarium’ is a sci-fi horror that doubles as one giant parable about the fears of growing up into adulthood. The film begins by introducing us to Tom (Eisenberg) and Gemma (Poots), a young couple who are ready to take the next step in their lives and buy their first home. On a search for the perfect first home, a strange estate agent (Jonathan Aris) takes them to a new development called Yonder, a new suburban development filled with identical houses. From the outset, it’s clear there’s something a little off about the neighbourhood, and this ramps up very quickly when Tom and Gemma realise they’re unable to leave, with all roads leading them back to where they started.

‘Vivarium’ is a film filled with interesting ideas and it develops a deeply unsettling atmosphere that permeates every scene, drilling into the character’s underlying fears about growing up and having children. It’s well acted by Poots and Eisenberg, who have performed in films together a few times before and have good chemistry, but I felt that the film started to run away with new ideas faster than it could really develop them, and my interest started to wane more and more as the filmmakers piled on more and more on top of the initial premise. There’s a lot of interesting things going on in ‘Vivarium’ but it never really builds into something truly captivating and I felt it spiraled out of control at the very point when the narrative should be tightening towards the finish.

‘Vivarium’ is a stylish feature from director Lorcan Finnegan and he gets good performances from his leading duo, but ultimately, I felt it lost control of the themes it was looking to explore and my initial intrigue dissipated into apathy by the time the film reached its conclusion.