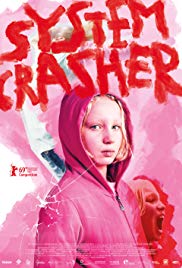 On her wild quest for love, 9-year-old Benni’s untamed energy drives everyone around her to despair.

Well this is a hell of a film, and one that hopefully gets a wider audience with everyone stuck at home with less new movies to watch. Directed by Nora Fingscheidt, ‘System Crasher’ is a film about Benni (Helena Zengel), a troubled nine-year-old girl caught up in the German social care system. The term ‘System Crasher’ is used by someone to describe Benni and it essentially means someone who has exhausted all options, leaving social services with limited routes to move forward.

As Benni, Helena Zengel is a real force of nature and she wins and breaks your heart in equal measure. She’s capable of being sweet and loving, yet equally as capable of being vicious, violent and downright nasty, and the balance is depicted well by the filmmakers. She’s an intelligent child but she can’t fully comprehend her situation or how to help herself out of it, and the insights (either overt or hinted at) into her past are disturbing and shine a light to an extent on why she behaves as she does. She wants to return to living with her mother but there are barriers to getting there, both in terms of her behavior and her mother’s attitude and will to look after her again, and it’s heartbreaking seeing this route to normality repeatedly blocked.

The film is even handed in its portrayal of the social services, with most of the people Benni comes across genuinely looking out for her best interests, whilst still finding themselves exasperated that their efforts often seem to lead to limited progress. Gabriela Maria Schmeide is terrific as Frau Bafane, and Albrecht Schuch wins you over almost as much as Benni as Michael Heller, a carer who has recovered from his own troubled past and sees elements of himself in Benni. ‘System Crasher’ is an incredibly compelling drama about social services, shown through the case of Benni, a troubled child who you can’t help but fall in love with. It’s on MUBI and Curzon Home Cinema in the UK now, and it’s well worth your time.