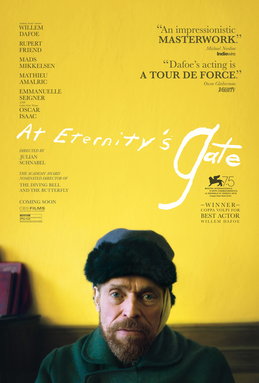 A look at the life of painter Vincent van Gogh during the time he lived in Arles and Auvers-sur-Oise, France.

Starring Willem Dafoe as Vincent Van Gogh, ‘At Eternity’s Gate’ is a character study of the tragic painter in his final years from ‘The Diving Bell & The Butterfly’ director, and artist, Julian Schnabel. This film reimagines Van Gogh’s final days and theorises that his death was not a result of suicide, based on the research of two art historians who have spent a lot of time looking into Van Gogh’s life and death. Willem Dafoe earned an Oscar nomination for his portrayal here and I thought this was an incredibly moving piece of work.

The narrative begins in 1888, as Van Gogh prepares to move to the small town of Arles in Southern France, in order to get away from Paris and connect with the beautiful, sparse countryside surrounding his new home. It’s clear that Van Gogh is not comfortable around big crowds and his mental health issues lead him into trouble, in a world where such things were yet to be recognized. To the ordinary observer Van Gogh is best known as the crazy artist who chopped his own ear off, but ‘At Eternity’s Gate’ is a much more sobering piece of work and it attempts to get inside the mind of this tortured soul, a man with such brilliant talent yet one who never fit within this society. It goes without saying that Dafoe is mesmerizing in the central role, creating a sympathetic portrayal and I empathised with him every step of the way. There’s a certain irony that Van Gogh’s talent was ignored in his lifetime, only to be recognized after his death, and the portrait Schnabel paints here is off a man who simply can’t catch a break.

The supporting cast contains the likes of Oscar Isaac as fellow artist Paul Gauguin, and Mads Mikkelsen as a sympathetic priest who aids Van Gogh towards the end of his life, but at its heart this is Dafoe’s film and its one of his finest performances. ‘At Eternity’s Gate’ is a poetic, captivating insight into Vincent Van Gogh and I found it both informative about his life and his troubles, as well as entertaining and moving, and I was very taken by this film. If you’re a fan of ‘At Eternity’s Gate’ or Vincent Van Gogh in general, I’d recommend seeking out ‘Loving Vincent’, a docudrama about his life crafted solely through the use of artwork similar to his style. From a filmmaking perspective it’s pretty spectacular.