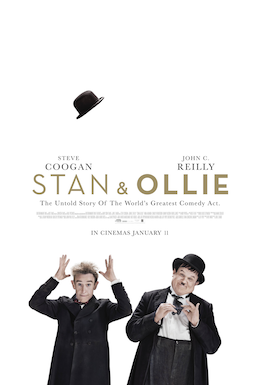 Laurel and Hardy, the world’s most famous comedy duo, attempt to reignite their film careers as they embark on what becomes their swan song – a grueling theatre tour of post-war Britain.

In their prime, Laurel & Hardy were amongst the finest entertainers in the world, held in the same kind of esteem generally reserved for the likes of Buster Keaton and Charlie Chaplin. This biopic from Jon S. Baird chooses to avoid their heyday, instead focusing on a time when the duo were older and their popularity was waning, and it’s a tender, loving tribute to two men who brought joy to so many people over the course of their careers. 1950s Britain is well recreated and I felt the film acted as a capsule of a different era, a simpler time when comedy was vastly different to how it is nowadays.

After a brief introduction in 1937 that marks a break in their professional relationship, we jump to 1953 as they are back together and about to embark on a music hall tour of the UK. They are older, tired and struggling to raise finance to get another film made, and the small audiences they perform in front of marks a stark contrast to the height of their fame. Steve Coogan and John C. Reilly portray Stan Laurel and Oliver Hardy respectively and the performances are beautifully pitched, recreating the slapstick and stage presence superbly whilst digging under the surface to get to the heart of the men behind the stage and screen personas. Their careers are and were inextricably intertwined and the weight of their professional relationship is heavy on both of their shoulders, with their bond tested by past betrayal and the doubts they now have in one another. Shirley Henderson and Nina Ariadne are excellent as their respective wives, a true case of opposites attract and when their producer Bernard Delfont (Rufus Jones) remarks that it’s two double acts for the price of one, he really means it.

The word pathos was made for films such as ‘Stan & Ollie’ as it movingly explores the relationship, both personal and creative, between these two beloved entertainers. The story is told simply and with affection for its subjects, and it balances humour and sadness incredibly well whilst allowing Coogan and Reilly the opportunity to shine in the leading roles. Laurel & Hardy’s humour, or their story, isn’t something I was particularly familiar with, but I found ‘Stan & Ollie’ to be far more engaging than I was expecting and I really enjoyed it.