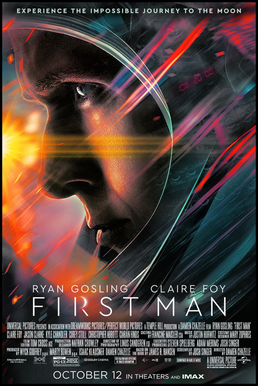 A look at the life of the astronaut, Neil Armstrong, and the legendary space mission that led him to become the first man to walk on the Moon on July 20, 1969.

Damien Chazelle has built up quite a filmography thus far and ‘First Man’ continues that winning streak after the success of ‘La La Land’ and ‘Whiplash’. Reuniting him with his ‘La La Land’ leading man in Ryan Gosling, ‘First Man’ is a biopic about Neil Armstrong and the moon landings, beginning 8 years prior and taking us through the key developments that led to Armstrong being the first man to set foot on the moon. The film is stunningly well put together, drawing together a terrific score from regular collaborator Justin Hurwitz, great special effects and excellent direction that sells both the beauty and the horror of what Armstrong is seeing and going through, particularly when the narrative takes us up amongst the stars.

‘First Man’ will not be the film that everyone expects and I think it is a better film as a result. It is less about the quest to put a man on the moon and more about who Neil Armstrong was as a man, focusing on his psyche and the events that drove him. The film doesn’t shy away from how momentous the achievement was, but it’s not a rousing celebration and it’s as low key as a film about such a big event could be. The legend of the moon landings misses out on the tragedies and countless casualties that occurred on the 8 year journey to prepare for the mission, but ‘First Man’ clearly depicts these losses and the impact they had on those closely involved. Armstrong’s friends come and go, leaving an incredible toll on a man already damaged by the loss of his daughter, and Gosling does some superb work in selling the pain that drives him forward. As his wife, Claire Foy is mostly restricted to looking forlorn and worried, but there’s a real humanity in her performance and she absolutely nails her biggest scene just before Armstrong heads off on the pivotal mission.

When we eventually arrive at the Apollo 11 mission, it is a truly breathtaking piece of cinema and it looked magnificent on the IMAX screen. From the vast emptiness and beautiful views from space to the realisation in Armstrong’s face, Chazelle’s direction contrasts the magnitude of the achievement with the intimacy of the moment and when Neil Armstrong says those immortal lines and makes his first steps out, it’s almost tinged by sadness at the trauma and loss that brought him to this point. By bringing a personal focus to one of mankind’s greatest achievements, Damien Chazelle has produced another spectacular film and ‘First Man’ is one of the best films I’ve seen this year.