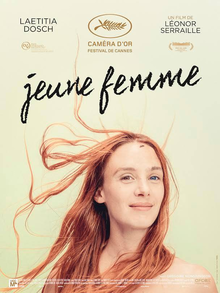 In her early thirties, broke, and in the wake of a humbling breakup, a spirited, yet rudderless young woman finds herself struggling to get by in the bustling Parisian metropolis; however, if she can make it there, she’ll make it anywhere.

The winner of the Camera d’Or (for best debut feature film) at last year’s Cannes Film Festival, ‘Jeune Femme’, is an energetic movie about a 31 year old spiralling after a messy breakup with an older man. That woman is Paula (Lætitia Dosch), a bit of a free spirit who we first meet just after the breakup, and the film follows her as she tries to readjust to single life in a big, impersonal city like Paris. Lætitia Dosch is excellent in the central role, and it’s a performance (and film) that echoes the likes of Greta Gerwig at her zaniest (‘Frances Ha’ in particular) – whether that description appeals or not will likely determine if this film is for you.

The script is sharp and funny with wry observations about life as a young person in a big city, particularly one still trying to find their place in the world. We learn that Paula was in a 10 year relationship with her previous partner and the knowledge that she spent almost the entirety of her 20s and most of her youth with this man emphasises the difficulty she has rebooting her life. Despite the set up and some dark sexual material, ‘Jeune Femme’ is actually quite an optimistic film and it’s ultimately about Paula learning to love herself. She takes many knocks and doesn’t have a great support network, but she keeps getting up and continues to strive for something better and as an audience we’re rooting for her on that journey. When the opportunity presents itself to move forward with her life in two different ways, the film (and the character) impresses by taking the bolder path instead of the tried and tested.

Cleverly written and smartly directed by Léonor Serraille, ‘Jeune Femme’ is a spirited drama that bristles with energy and has a real sense of ‘joie de vivre’ throughout. The compelling performance from Lætitia Dosch makes a potentially hard to like character easy to warm too (the cute cat that accompanies her throughout doesn’t do any harm!) and I thought this was a really likeable movie that deserves to find a wider audience.