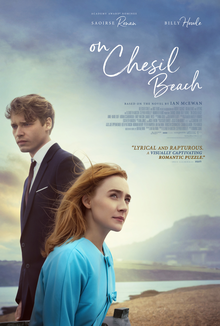 Based on Ian McEwan’s novel. In 1962 England, a young couple find their idyllic romance colliding with issues of sexual freedom and societal pressure, leading to an awkward and fateful wedding night.

Adapted from an Ian McEwan novel, ‘On Chesil Beach’ is a British drama about two young lovers who destroy their marriage due to a fear of intimacy in the early 60s. The film is set in 1962 and this is important to the nature of the story, with the time period coming before the onset of the swinging sixties and cool Britannia, in a period where the characters true feelings remain mostly internalised. It is directed by Dominic Cooke and he takes an approach that grounds the film principally in a hotel room by Chesil Beach and utilises flashbacks to tell the story of how Florence (Saiorse Ronan) and Edward (Billy Howle) met and arrived at this point. I felt the filmmakers struggled to make these flashbacks work alongside the real time drama and the film is often boring, especially through the middle part, but it does bring things together for a strong final act that draws out the best from the actors and the material.

The cast is led by Saoirse Ronan and Billy Howle as the young lovers and I thought both delivered effective performances that outlined the issues they both had, even as I never fully bought the films view of them as doomed lovers. Ronan is one of the best young actresses around but it’s Howle who I was particularly impressed with, as someone who I’ve only seen before in a small role in ‘Dunkirk’. My understanding is the novel has a complicated timeline that moves between past, present and future and I don’t think the filmmakers succeed in drawing these elements together to create a satisfying viewing experience and the observations it offers about Florence and Edward’s relationship are not particularly exciting or insightful. For lack of a better phrase it’s a chore getting through large parts of the narrative but it’s almost worth it for a strong conclusion that had a harder emotional hit on me than I was expecting given my indifference towards the story up to that point.

The performances from Ronan and Howle are good, particularly in the climactic moment on the beach (as referenced in the title), but that alone wasn’t enough for ‘On Chesil Beach’ to maintain my interest, even as the stirring resolution hints at the power this story could have had with a sharper script throughout.