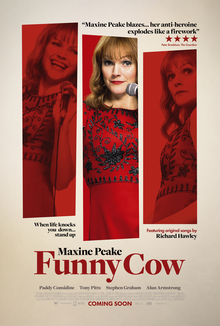 A comedian uses her troubled past as material for her stand-up routine, trying to rise up through the comedy circuit by playing Northern England’s working men’s clubs.

‘Funny Cow’ is a British comedy drama about a woman (Maxine Peake) who attempts to make a name for herself on the stand-up comedy circuit in the North of England. It’s a film that delves into the intimidating atmosphere of a working men’s club, especially for a woman, and it pulls no punches as it delves into the often toxic environment and blatantly racist material that frequented comedy clubs in the period the film is set (70s and 80s). The film is a little patchy and introduces a lot of ideas, not always successfully, but it’s all held together by Maxine Peake’s brilliant performance in the central role and she’s compelling throughout.

We follow Peake’s titular character (who is never named) through her childhood to her relationships as an adult, and the film attempts to show how these experiences blend into the material she uses in her stand-up sets. It’s a far darker film than I expected as it explores the lonely existence of a jobbing comedian (Alun Armstrong is brilliant as the ageing Lenny) and it both shows why ‘Funny Cow’ would be drawn to this world whilst also acting as a cautionary tale. ‘Funny Cow’ isn’t an outright likeable character but she has a toughness and spiky swagger that makes us root for her, helped of course by Peake’s strong performance. Paddy Considine and Tony Pitts provide solid support as two different kinds of lovers she comes across and there are brief cameos from the likes of Vic Reeves and Kevin Eldon as people she meets on the comedy circuit.

‘Funny Cow’ is a great showcase for Maxine Peake’s dominant central performance, and alongside some good supporting displays and Richard Hawley’s soulful soundtrack I found much to like in this film, even if it’s never clear which of its ideas it wants to spend most of its runtime on.