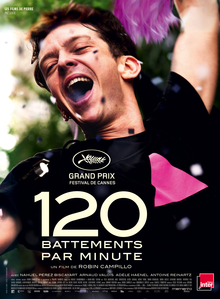 Members of the advocacy group ACT UP Paris demand action by the government and pharmaceutical companies to combat the AIDS epidemic in the early 1990s.

‘120 Beats per Minute’ is an impressive film about the AIDS crisis, viewed from the perspective of a prominent activist group in Paris in the early 90s. Given how much progress has been made in a relatively short space of time, it’s hard to believe how dire the consequences were for someone with the HIV virus at the time the film is set and ‘120 Beats per Minute’ sets out to show the vital part these activist groups played in driving the progress taking us to where things are today. It’s both a thrilling politically charged historical drama and a tragic love story, with both elements dovetailing fluidly in this excellent piece of work from Robin Campillo.

The film features a large ensemble cast who make up the ‘Act Up’ pressure group, set up to force the government and medical organisations to make faster progress in finding a cure whilst also educating people about the importance of practising safe sex. It shows the differing views within activist groups really well, contrasting between the moderates and the more aggressive members who want to take more extreme action, with this tension heightened by the fact that many members know they are running out of time. Campillo’s film is smartly written and never favours either view, showcasing the benefits and downsides of both approaches. In that respect it reminded me of the German film ‘The Baader Meinhof Complex’ from around 10 years ago, which took a similarly engaging approach to a group of militants fighting for a cause.

Two of the activists who are featured more prominently are Nathan (Arnaud Valois), a new member, and Sean (Nahuel Pérez Biscayart), a founding member who is HIV positive. They fall in love and the film is superb at showing how Sean’s disease changes him from a young man who is full of life to a shadow of himself as his condition starts to worsen, and it’s heartbreaking to watch. Both Valois and Biscayart are outstanding and have great chemistry with each other, and they are particularly excellent as they handle weighty monologues about their experiences as young, gay men growing up in the environment of the time.

The film clocks in at over 2 hours but I felt it breezed by as Campillo brilliantly draws the personal experiences of these characters together without sacrificing an important political point, inspired by his experiences of living through this in his younger days. It’s got great music (Bronski Beat’s ‘Smalltown Boy’ is inserted smartly at a key moment) and great performances and I felt ‘120 Beats per Minute’ was an engrossing and moving film about a piece of recent history that should not be forgotten.