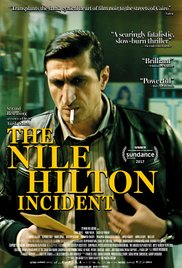 A maid witnesses a murder at an upscale hotel and a policeman is assigned to the case, but it soon becomes clear that important people don’t want the case solved.

Loosely based on a true story, ‘The Nile Hilton Incident’ is a Swedish production set in Egypt just before the 2011 revolution focusing on police corruption through a case involving a murdered singer. It stars Fares Fares as Noredin Mostafa, a detective tasked with investigating the murder of Lalena (Rebecca Simonsson), who is found brutally murdered in a room at the Nile Hilton hotel. In the set up of this case the film covers many familiar beats such as a witness that’s hard to track down and shady links between Lalena and rich businessmen, but the edge is provided by the socio-political context that ‘The Nile Hilton Incident’ explores as Noredin attempts to find out what happened despite facing pushback at every turn.

The film shares many similarities with a traditional film noir set up, both in terms of the way the narrative plays out and particularly in the character of Noredin Mostafa, who would have fit in well in some of the classic noirs of yesteryear. In that leading role, Fares Fares is outstanding, bringing more life to a character that could have been a stock detective character without his involvement. He’s slickly dressed, always smoking and at times it feels like he’s the only man who wants to find out the truth as he’s fighting an uphill battle against the tide of corruption that has infested the police and security services. His dogged attitude and determination get him into trouble, but it makes him an incredibly compelling character to watch and the film has crafted a gripping case that I was fully invested in. The film never feels preachy despite the overt political overtones that are contained within the plot and I felt it succinctly detailed the motivations that drove each character, ultimately leading to the difficulty Noredin has in getting to the truth as colleagues and friends alike are compromised.

‘The Nile Hilton Incident’ is a superior thriller that uses a murder case as a jumping off point to explore police corruption in Egypt prior to the revolution, showing just how ingrained this was and the trickle down impact it has on the lives of ordinary citizens, and I thought it was an excellent movie.