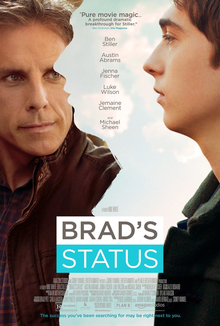 A father takes his son to tour colleges on the East Coast and meets up with an old friend who makes him feel inferior about his life’s choices.

In recent years Ben Stiller has transitioned from outright comedy roles into ‘dramedy’ roles, typically playing middle aged guys having some form of midlife crisis and ‘Brad’s Status’ is another film that falls neatly into the comedy-drama bracket. Stiller plays Brad Sloan, a 47 year old man who lives a comfortable existence with a loving wife (Jenna Fischer), a teenage son (Austin Abrams) and a rewarding job at a non-profit organisation, but he remains envious of the achievements of his friends from college who have surpassed him in wealth and fame. These feelings are heightened as he prepares to take his son on a tour of colleges and he starts to reflect back on how his life has turned out, wondering about what might have been if he’d made different choices. The film is a critique of white, male privilege, but it also wants us to identify with Brad’s feelings and it’s a tricky balancing act that I felt ‘Brad’s Status’ mostly succeeded at.

Stiller is perfectly cast as Brad and he manages to make the character feel sympathetic despite it being clear that his concerns are trivial in the grand schemes, and are a symptom of having no ‘real’ problems in life to worry about. It speaks to the nature of growing old and regretting how things have turned out, and pondering the ‘Sliding Doors’ style scenarios where one decision could have led your life down a different path, and I think that’s probably fairly universal to people from all kinds of backgrounds. Brad feels the way he does because of the environment he exists in, but the film isn’t afraid to judge him or call him out on his bullshit, largely through Ananya (Shazi Raja), one of his son’s friends who is already studying music at Harvard. Brad has put the lives of his college friends on a pedestal, imagining the glamour and the ease in which they go through life, but the film undercuts this by showing that whilst these people may have lots of money, it doesn’t mean their lives are worth aspiring towards.

The friends are played by Michael Sheen, Luke Wilson, Jemaine Clement and director Mike White, who are all well cast in minor parts, but out of the support I particularly enjoyed Jenna Fischer’s performance which just exudes warmth as Brad’s loving wife who he clearly underappreciates. A film about a middle class white man complaining about his status in life may not appeal to everyone (particularly in the current landscape), but I felt ‘Brad’s Status’ was nuanced and insightful enough to overcome any concerns, helped by some smart observations and a finely tuned lead performance from Ben Stiller.