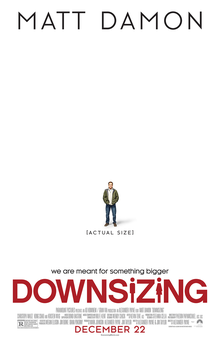 A social satire in which a man realizes he would have a better life if he were to shrink himself to five inches tall, allowing him to live in wealth and splendor.

‘Downsizing’ is a great premise searching for a great story, and unfortunately director Alexander Payne and his screenwriting partner Jim Taylor don’t manage to find one. The premise of the film imagines a world where technology exists that allows people to make the decision to be ‘downsized’, i.e. shrunk to the height of five inches, allowing them to live in a world where their finances go much further and they can benefit the environment to boot. The process isn’t portrayed in a ‘Honey, I Shrunk the Kids’ style way with all manners of bugs and birds to be wary off; the small people primarily live in idyllic living communities established for them by corporations who have utilised the technology to make money. It’s a premise with a world of possibility but the job of finding the best ideas to explore here is beyond the screenwriters and I felt frustrated with the way things played out.

Our protagonist is Paul Safranek (Matt Damon), a middle aged man who works as a supervisor in a meat factory, who is immediately taken by the new technology. The early introductions to the ‘Downsizing’ process and how it affects everyday life for both those who have downsized and those who haven’t are amongst the best of the film, filled with surreal and offbeat humour that grounds the absurdity of the premise in some kind of reality. In theory, it should get better once Paul persuades his wife, Audrey (Kristen Wiig), to undergo the transformation and move to the popular community for the small called Leisureland, but it seems to flatten after this point for some time. The film picks up with the introduction of two characters: Dusan, Paul’s upstairs neighbour who is played by Christoph Waltz in a very Christoph Waltz performance, an ageing party animal who throws the best parties in town, and Ngoc Lan Tran (Hong Chau), a Vietnamese activist who was shrunk against her will and now finds herself working as a cleaner in Leisureland. Chau is the standout performer in the film, playing a character that starts off as comic relief and initially feels like a crude stereotype, but she fast becomes the emotional centre of the film and ‘Downsizing’ is a much better movie whenever she’s on screen.

There are some great flourishes in ‘Downsizing’, with the visuals from a small perspective generating some laughs and the talented cast making the most of the material available, but I had high expectations for this film and it did disappoint. The screenplay feels half baked, with Payne and Taylor dipping their toes into topics such as the environment, consumerism and the refugee experience without ever fully committing, and the film as a whole suffers from a lack of direction, with the ultimate journey less ambitious than I’d hoped for given the premise. I did enjoy ‘Downsizing’ and at its best, it’s a sharp sci-fi satire that holds a mirror up to our world, with enjoyable performances and a wicked premise, but it’s too scattershot and doesn’t develop the interesting ideas at its core nearly enough.