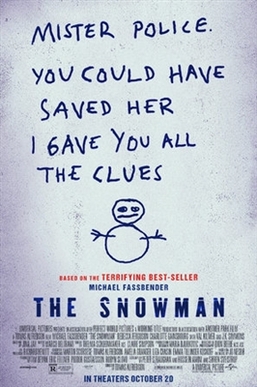 Detective Harry Hole investigates the disappearance of a woman whose pink scarf is found wrapped around an ominous-looking snowman.

‘The Snowman’ comes along with a lot of pedigree, from its basis on a series of best selling novels from acclaimed author Jo Nesbo, to it’s strong cast and direction from Tomas Alfredson, helmer of ‘Let The Right One In’ and ‘Tinker Tailor Soldier Spy’. So it’s disappointing that the end result is a by the numbers serial killer thriller, not particularly bad but not particularly good either. The premise of the film surrounds a series of murders where the killer leaves menacing looking snowmen at the scene of the crime, and the film follows the investigation whilst delving into events in the past when the killer first struck. The cinematography makes good use of the snow covered Norwegian landscape and there’s an eerie feel to early proceedings, but ‘The Snowman’ never uses this setting to develop the story into something truly worth investing in.

Our protagonist is Harry Hole (Michael Fassbender), a brilliant yet troubled, alcoholic detective, a trope that is so well worn by now that it’s almost comical (I don’t doubt the book series does a stronger job of expanding on his character), who teams up with a rookie (Rebecca Ferguson) to investigate the murders in Oslo, Norway. We’re introduced to a variety of supporting characters, primarily to provide a range of options as to who the killer may be, and there’s a backdrop with a potentially shady businessman (J. K. Simmons) leading a bid for Oslo to host a major winter sports event. I guess the main problem is that the material never really gripped me, and for much of the runtime it felt like a procession through the key touchpoints of a serial killer movie, with red herrings introduced and dismissed, and the end result barely registering a shrug. The best bits of the film are in the past in Bergen with Val Kilmer’s character and I wish we’d spent longer there, as he seemed a more interesting character than Harry Hole.

There was enough in ‘The Snowman’ to make this a worthwhile watch for me, but it has to go down as a disappointment given the calibre of people involved in the production. After ‘Assassin’s Creed’ and ‘Trespass Against Us’, Fassbender is having a poor year after a seriously strong run, so here’s hoping he can bounce back next year!