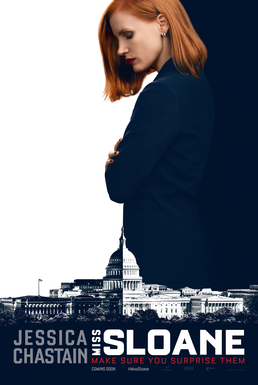 In the high-stakes world of political power-brokers, Elizabeth Sloane is the most sought after and formidable lobbyist in D.C. But when taking on the most powerful opponent of her career, she finds winning may come at too high a price.

‘Miss Sloane’ is an enjoyable movie about the murky practice of lobbying, focusing on the determined and driven Elizabeth Sloane’s battle to win support for a government bill on gun control. Elizabeth Sloane is played by Jessica Chastain in a phenomenally captivating display; from the outset Chastain has your attention and it never lets up throughout. It’s just as well, as the film struggles with the elements surrounding Chastain and the narrative relies on the audience to suspend their disbelief on several occasions. Thankfully, Chastain just about manages to make it work.

‘Miss Sloane’ is at its strongest when it gets down into the dirt of lobbying, exploring the issues of the film through the various tactics deployed by the teams fighting for and against the bill. It’s a deeply cynical movie in its view of politics and politicians but it’s sadly likely to be an accurate view, where money and job retention matter more to many politicians at the expense of their beliefs and principles (if they had any to begin with). ‘Miss Sloane’ explores this well through several minor political characters who are manipulated by both sides of the gun lobbying debate. I felt the film strained credibility at times through the titular character, who we have to believe to be not just a supremely intelligent and capable individual, but essentially something approaching superhero levels with her ability to plot every move her opponents make and to think several steps ahead. On one level I can admire the film’s audacity and Chastain sells the hell out of it, but on another level, the material and the character of Elizabeth Sloane would be compelling enough without the embellishments.

The film is aided by several well cast supporting members, from Gugu Mbatha-Raw as the film’s heart, to the likes of Sam Waterston and John Lithgow as members of the political establishment, whether it be a senator or an executive at a lobbying firm. At times the film feels like it was written by Aaron Sorkin, from the snappy dialogue to the walk and talks, to the inclusion of Alison Pill and Sam Waterston from his recent TV series ‘The Newsroom’, and in this case, that’s a good thing. ‘Miss Sloane’ is a terrific showcase for an outstanding Jessica Chastain performance, and whilst it tackles an interesting topic, the story didn’t quite get under my skin as much as I’d have liked it too.