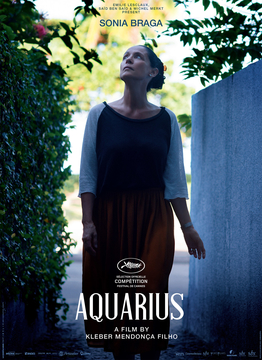 Aquarius is a 2016 Brazilian–French drama film directed by Kleber Mendonça Filho and starring Sonia Braga as Clara, the last resident of Aquarius building, who refuses to sell her apartment to a construction company that intends to replace it with a new edifice

‘Aquarius’ has proven quite controversial in its home country of Brazil, largely down to its subject matter that carries significant political undertones. The film is about Clara (Sônia Braga), a retired music writer who is the last resident of an apartment building on the Recife waterfront known as the ‘Aquarius’. Clara is a little stubborn and a little nostalgic for the home she brought her family up in, and she won’t budge when a group of developers make repeated attempts to buy her out in order to knock down the building and start again. When Clara won’t move, Diego (Humberto Carrão), one of the designers, resorts to increasingly underhand tactics to disturb her, from vandalism to loud parties late at night in the apartments above her (which the construction company now own).

The film explores the ways in which big business tries to undermine the individual, and how the system allows them to get away with it, with people like Clara seen as obstacles to be removed at any cost, with no empathy or consideration for them as a person. The actions of the unscrupulous construction company that Clara is faced with act in many ways as a microcosm for the government in Brazil and the film’s message is largely justified by attempts from the powers at be in real life to get people to boycott the movie. The film has a lot more to say for itself than to just explore important social issues though, and it has some really compelling things to say about the nature of life, the past and how we reflect on things. It’s driven by a beautifully realised performance as Clara from Sônia Braga who is both feisty and vulnerable, and as we learn about her past through flashbacks, we start to understand why she holds this apartment so dearly. It’s no surprise that as a former music writer Clara has great taste, and this feeds through in the superb musical choices scattered throughout the film, namely the memorable use of two ‘Queen’ tracks.

I thought ‘Aquarius’ was a very good piece of cinema that tackles a challenging topic with an open mind and clever writing, and in Sônia Braga’s tour de force display in the leading role, we have one of the year’s great performances thus far.