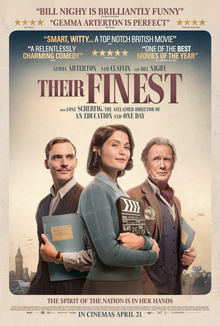 A British film crew attempts to boost morale during World War II by making a propaganda film after the Blitzkrieg.

‘Their Finest’ is a solidly crafted piece of British cinema, focusing on the efforts of the British Ministry to create a positive propaganda movie about the Dunkirk evacuation during the Second World War. Our viewpoint into the making of the film is largely through Catrin Cole (Gemma Arterton), a Welsh woman brought into a very male driven environment to provide a female perspective in the writing process, as well as her writing partner and potential love interest Tom Buckley (Sam Claflin). There’s minimal set up involved and the best parts of the film come when it really leans into the film within a film structure, and of course any of the scenes involving the imperious Bill Nighy.

The film has a very old fashioned sensibility in how it’s styled and I liked the screwball approach to the dialogue and the character interactions. It’s well performed, led superbly by Gemma Arterton who carries much of the film, and there’s a lot of fun in the supporting roles as well (Jeremy Irons turns up for one terrific scene). I did feel that the narrative was a little undercooked and the story never quite hit the heights I was hoping for, and it often relied on the likes of Nighy to elevate the material with scene stealing aplomb. It is pretty funny at times, with the comic timing on point throughout, and the chemistry between the leading actors is terrific. I was also impressed that when it felt like it was taking us down a predictable path, it throws something from leftfield into the fray that worked effectively.

‘Their Finest’ is a warm hearted and mildly enjoyable movie, telling a different kind of Second World War story, and it’s great fun watching Gemma Arterton and Bill Nighy in particular do their thing, but I did feel that the story itself never quite coalesced into something truly engaging and entertaining.