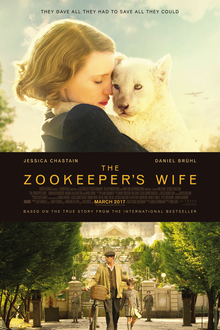 The Zookeeper’s Wife tells the account of keepers of the Warsaw Zoo, Antonina and Jan Zabinski, who helped save hundreds of people and animals during the German invasion

‘The Zookeeper’s Wife’ is a sporadically moving film about the Nazi occupation of Warsaw during the Second World War, told through the eyes of the wife of a zookeeper. Much of the story takes place in Warsaw Zoo, where Antonina (Jessica Chastain) and Jan Żabińska (Johan Heldenbergh) reside alongside some of their workers and a plethora of animals (who are introduced in a cheesy opening sequence). The spectre of the impending war hangs over the characters from the outset, particularly when a German zoologist, Lutz (Daniel Brühl), pays a visit, and the film quickly moves to action once the Germans arrive. When war does break out, the zoo and many of the animals are destroyed or taken away, but Antonina uses her prior relationship with Lutz and the status of her and her husband as non Jews to persuade the Nazi’s to allow the zoo to remain open as a pig farm. This pretence and their status allowed the Żabińska’s to help shield and save the lives of many Jews, smuggling them from the ghetto’s and ferrying them out to safety under cover of darkness.

If the premise feels a little ‘Schindler’s List-lite’ then that’s because it does attempt to tell a similar story of everyday heroism amidst the sheer brutality and horrors of the Nazi regime. ‘The Zookeeper’s Wife’ isn’t on the same level as Spielberg’s masterpiece for a number of reasons, but this is a story worth telling and for the most part, it does justice to the people involved, even if the execution isn’t always as good as it could be. The performances aren’t of the highest calibre and are fairly stilted, with the exception of Daniel Brühl as the sleazy Lutz who turns from friend into captor at the start of the war. I also felt Jessica Chastain was irritating in the lead, partly down to the poor dialogue she’s given and partly down to a dreadful attempt at a Polish accent that had me cringing with just about every word. The film does work in spells and it’s particularly successful at showing the gradual build from hearsay to occupation and ultimately to genocide, and of course, it has cute animals. Never underestimate the use of cute animals, even in a film about the holocaust.

‘The Zookeeper’s Wife’ is a solidly crafted film with a stirring basis in true events, but it never quite hits with the impact I would expect from a film about such a subject.