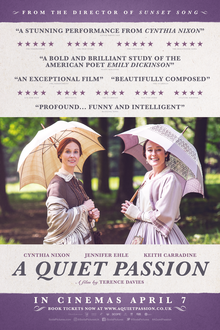 The story of American poet Emily Dickinson from her early days as a young schoolgirl to her later years as a reclusive, unrecognized artist.

The latest film from Terence Davies, ‘A Quiet Passion’ is pretty much what I’ve come to expect from him. It’s lovingly crafted and his undoubted skill as a director shines through, but it’s dragged down by a dull subject matter that I think anyone would struggle to really bring to life. To be fair, I doubt I’m the target audience for this film and the general reviews have been positive, but I often feel with Terence Davies films that people are willing to overlook arguably the most important element (the story and the script) whilst salivating over the artistry surrounding it.

The subject of ‘A Quiet Passion’ is the reclusive American poet Emily Dickinson, portrayed here superbly by Cynthia Nixon. The main problem with a biopic about Dickinson is that she did not lead an interesting life, and I felt that Davies approach failed to overcome this significant hurdle. Dickinson, particularly as she got older, rarely left the house so the film is all shot in one location, and this does lead to a claustrophobic feel that combined with Nixon’s performance was reasonably effective at creating a foreboding mood, but the film suffers as it focuses more on Dickinson’s spitefulness at how her life has turned out, and less on the poetry that made her posthumously famous. In a film with limited action, the character interactions become even more important, so it’s even more frustrating that the dialogue between the characters feels artificial and overwritten, likely sounding better on the page than it does in practice.

The film’s good points come through in the performances and the overlay of Dickinson’s poetry, which Davies uses to compliment the action (I’ll use that term loosely in a film where little happens) on the screen, and there’s a great stylistic flourish in a photography studio to show the passing of time as the younger actors are replaced by their adult counterparts. Cynthia Nixon is genuinely superb in a role she was born to play, but it’s a shame that role appears in a film with little to recommend beyond her display, and I’d suggest this film will only appeal to those with a keen interest in Dickinson’s life beyond her poetry.