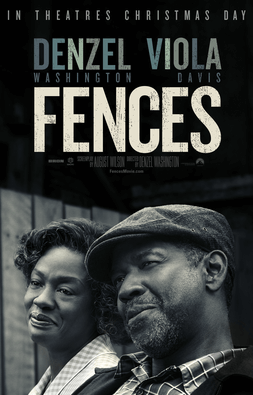 A working-class African-American father tries to raise his family in the 1950s, while coming to terms with the events of his life.

Adapted from August Wilson’s stage play, ‘Fences’ is a film about a black family living in Pittsburgh in 1950s America. Its primary focus is on the patriarch of the family, Troy (Denzel Washington), an embittered man who works as a waste collector whilst reminiscing over what he could have achieved as a talented baseball player in his youth. He lives with his wife Rose (Viola Davis), and son Cory (Jovan Adepo), and the film starts to explore Troy’s past in order to explain how he became the man he is today. It’s an engrossing story, performed superbly and there’s an intensity to the film at times that really engages you in the film’s themes and narrative, but it’s not a cinematic experience and in trying to do justice to the source, Washington ensures this is merely a good film and not a great one.

It is abundantly clear from the outset that ‘Fences’ was based on a stage play, and this comes through in everything from the dialogue to the staging to the performances. Washington’s direction never expands on the story’s stage roots and he rarely adds any stylistic flourishes to make the movie feel cinematic, and that’s a little bit of a problem. The best stage adaptations take the spirit of the stage play and use the tools at their disposal to make the story more cinematic, but ‘Fences’ is a straight adaptation and it loses much of the power of the theatre without compensating through the cinematic. In the film’s key moments, Washington does manage to capture the intensity in the performances through close camerawork and intimate displays from Viola Davis and himself in particular, but these moments are infrequent and we’re often barraged by too much dialogue that may work on stage, but works less on screen.

Denzel Washington’s Troy is a complex character, but I felt the film and its characters view him with a sunnier outlook than he deserves, given the way he behaves and treats his family throughout the film. He’s a man wracked by bitterness and resentment at how his life turned out, and it manifests in ugly ways. Washington plays him well, keeping our gaze without gaining our sympathies, and despite the opening 20 minutes where he’s really irritating, I found him a fascinating character to watch for the most part. As his long suffering wife, Viola Davis is tremendous, and much of the joy in ‘Fences’ come when she faces off with Washington, leading to some forceful and powerful acting from two of the best in the business and it’s a thrill to watch it all unfold.

‘Fences’ isn’t an original piece of moviemaking by any stretch, but it does deliver an impactful and powerful drama and I found the story to be gripping and intense throughout.